The WBC ordered #2 ranked lightweight contender Pitbull Cruz (24-2-1, 17 KOs) and Stevenson to fight next, with the winner to take on the Devin Haney vs. Vasyl Lomchenko victor for the undisputed 135-kb championship.

You can’t blame Cruz for not wanting to fight defensive artist Shakur because it would be almost impossible for him to land his shots, and it would be a bad career move for the Mexican slugger.

Pitbull Cruz can make a lot of money in a rematch with WBA ‘regular’ lightweight champion Gervonta ‘Tank’ Davis in 2023.

It’s believed that Mayweather Promotions plan on putting together a rematch between Tank and Cruz, likely next year.

As such, the money Pitbull Cruz can make fighting Gervonta on Showtime PPV will probably be a lot more than he’d get fighting Stevenson on ESPN+.

“I think we’ll go in a different direction for Shakur. Because there are four sanctioning bodies,” said Arum when asked what happens when a sanctioning body orders a fight, but the promoters don’t want to make the contest.

“Cruz will probably look to fight somebody else for another sanctioning body’s mandatory, and we’ll do the same with Shakur.

“If I’m wrong, we’ve reached out to Sean Gibbons. Shakur will obviously fight anybody at 135 because he’s a fantastic fighter, and I don’t blame Cruz for not wanting to fight him.

“100%,” said Arum about whether he’d be interested in making the Stevenson-Cruz fight if Pitbull and his promoters were interested in fighting Shakur.

“I  can’t really see anybody other than the top, top guys, like Haney or Lomachenko, being anything other than an easy fight for Shakur. He’s that good,” said Arum. 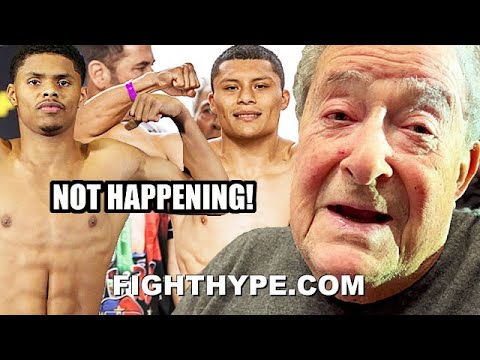 
« Janibek Alimkhanuly vs. Denzel Bentley tonight, preview and time of the fight