By Jim Calfa: Jose Benavidez Sr predicts that Dmitry Bivol will knock out the depleted, physically aging Canelo Alvarez and put him out of his misery when or if they face each other next year in September.

Canelo hasn’t looked like the same guy since the Caleb Plant fight, and it could be that the punishment he took in that contest took the best part of him, leaving the shell that Bivol easily beat and the 40-year-old Gennadiy Golovkin came same close to beating.

Jose Jr, the father of unbeaten interim WBC super middleweight champion David Benavidez, says Canelo (58-2-2, 39 KOs) has shown signs of deterioration since his grueling fight against ‘Sweethands’ Plant last year in November, and he’s not looked the same in his two fights since against Bivol and Gennadiy Golovkin.

Canelo says he wants to take a tune-up fight in May and then face WBA light heavyweight champion Bivol (21-0, 11 KOs) in a rematch in September 2023.

Boxing fans would prefer that Canelo face the winner of the Benavidez vs. Plant fight rather than see him get beaten up again by Bivol; he prefers to try and avenge his loss from last May.

Retirement not far off

“I believe that if Canelo accepts a fight with Bivol at 175 pounds, I dare to say that Bivol can stop him”, said Jose Benavidez Sr to Izquierdazo. “We haven’t seen the same Canelo since the fight with Plant.

“Canelo has been deteriorating little by little. I believe that Canelo is wearing himself out. Since the fight with Plant, I have seen him decline.”

If Bivol lets his hands go for the knockout, the chances are high that he’ll KO Canelo next September. Bivol fought like he was taking it easy on Canelo last May, and seemed like he could have done a lot of damage if he switched out of first gear.

In the fifth round, Bivol was hitting Canelo at will when he unloaded with a seven-punch combination, but surprisingly, he backed off after that and opted to box him the rest of the way.

“His body is not responding in the same way.  I say that maybe his retirement might be something very close. His reflexes are not the same anymore,” said Benavidez Sr about Canelo.

It’ll be difficult for Canelo to stomach a second loss to Bivol, especially if it’s a knockout defeat. He’s never been stopped before in his career, and it would be hard for him to handle losing in that manner.

“The plan is to return in May. I plan to start hitting the bags in January and see how it feels,” said Canelo to VMC. “I’ll come back in May in a tune-up fight, just to see how the hand feels, and then in September, the rematch with Bivol.”

Taking a tune-up in May could be risky for Canelo because the way he’s looked in his last two fights, he’ll struggle against even fringe contenders at 168.

“It’s the only thing I really want now in my career. Let’s see what happens in that fight,” said Canelo about the David Benavidez vs. Caleb Plant bout in March.

“But as I said, my main objective is a rematch with Bivol. My injury is a lot better than I thought it would be. Now I feel really good. I expect to return in May, but I don’t know,” said Canelo. 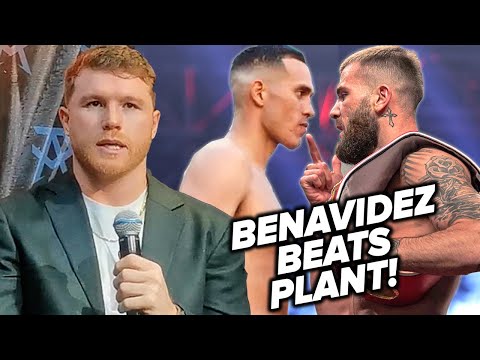 
« Teofimo Lopez to fight Sandor Martin on Dec.10th in New York on ESPN+, Pedraza out due to illness