By Jack Tiernan: Aidos Yerbossynuly is reportedly in critical condition following brain surgery last Sunday after being knocked out in the 12th round by WBA secondary super middleweight champion David Morrell last Saturday night at The Armoury in Minneapolis, Minnesota.

Yerbossynuly has been put in a medically induced coma and is in critical condition, according to Marca. It’s still too early to know what the outcome will be for Yerbossynuly.

The 30-year-old Yerbossynuly (16-1, 11 KOs) took horrifying oneway punishment from the champion Morrell (8-0, 7 KOs) and never stood a chance of winning from the get-go.

“Aidos Yerbossynuly (16-1-0, 11 KOs) has been put in a medically induced coma after undergoing surgery for a brain hemorrhage following his loss to David Morrell (8-0, 7 KOs) on Saturday night,” per Marca.

In the 12th round, Yerbossynuly looked like he needed saving, as he getting battered by Morrell.

Still, neither the referee nor his corner did anything to halt the fight until after Yerbossynuly was knocked down twice. At that point, the referee stepped in and stopped the contest. 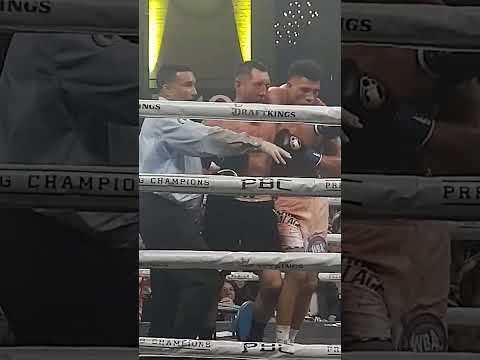 When Yerbossnuly attempted to walk back to his corner after the contest was waived off, he collapsed, making it necessary for the referee and Morrell to help him by supporting him every step of the way.

It’s unclear why the referee or Yerbossynuly’s corner didn’t stop the bout earlier when it was obvious that he was taking a beating from Morrell.

Unbeaten 24-year-old Morrell out-landed Yerbossy 237 to 82, with 70% of his shots being power punches upstairs.

The 30-year-old Yerbossynuly, who comes from Kazahstan, wasn’t competitive, especially in the later rounds. He didn’t possess the hand speed or the boxing skills to deal with the Cuban Morrell, and it was disturbing to watch the fight because it was so one-sided.

The World Boxing Association did Yerbossynuly no favors by giving him a #1 ranking and making him the mandatory challenger to WBA 168-lb champion Morrell after a victory over Lennox Allen. That’s the only notable name on Yerbossynuly’s seven-year pro resume, and that’s not a big name.

In hindsight, the WBA should have picked a better-prepared fighter to be their #1 contender for Morrell than Yerbossynuly because it was clear even before the fight that he was not in the same class as the champion.


« “Dmitry Bivol is the king of the division” said Eddie Hearn