By Geoffrey Ciani: The mid-1990s was one of the most interesting and bizarre periods in heavyweight history.

The conclusion of 1995 was an especially peculiar time. The WBC title was held by Frank Bruno, the WBA title was held by Bruce Seldon, the IBF belt was vacant, and Big George Foreman still had a valid claim to the world heavyweight lineal championship. 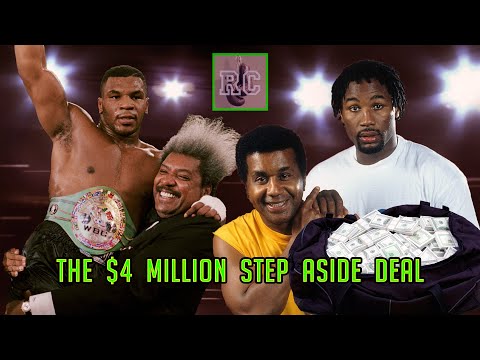 Meanwhile, the guys who were generally considered to be the best heavyweights in the world at that time were a quartet of former champions, including Riddick Bowe and Lennox Lewis, as well as Michael Moorer and Evander Holyfield. Adding even more intrigue to an already strange heavyweight landscape was the fact that Iron Mike Tyson was back, having had 2 fights in 1995 – his first since he was released from prison, and his first fights in more than 4 years.

The following year in 1996, Mike Tyson beat Frank Bruno to become the new WBC heavyweight champion, which also marked Iron Mike as a two time heavyweight champ. At that time Lennox Lewis was the #1 mandatory contender. And this is where the infamous step aside deal came into play.

NEWS:   Video: Did Lennox Lewis Have a Glass Jaw?

This edition of Rummy’s Corner will attempt to answer that question while providing some relevant background information leading up the famous step aside deal. Please watch and enjoy the video for one man’s opinion. This is Rummy’s Corner (produced and narrated by Geoffrey Ciani).

Eddie Hearn says Anthony Joshua vs. Deontay Wilder in 2023: “We want that fight” »