By Dan Ambrose: Ryan Garcia took to social media today to badger Gervonta ‘Tank’ Davis about him losing his pen to sign the contract to face him.

Kingry (23-0, 19 KOs) is in a position where he’s chasing a fight against the seemingly reluctant WBA ‘regular’ lightweight champion Tank Davis (27-0, 25 KOs).

Ryan wants to “shock the world” by knocking out Tank, but it’s up to his handlers at Mayweather Promotions whether this fight takes place or not.

They’ve been keeping the 27-year-old Gervonta under lock & key, not putting him in with the dangerous lightweights and arguably stunting his career in the process.

When you look at the type of fights that Floyd Mayweather Jr already had by the time he was Tank Davis’s age at 27, there’s no comparison. Mayweather was fighting everyone, but we haven’t seen that from Tank. You got to ask why.

If Mayweather Promotions aren’t going to put Tank Davis in with guys like Ryan, Devin Haney, or Vasyl Lomachenko, they’re wasting his career.

Ryan Garcia: “Gervonta needs to sign this contract. He’s having trouble finding his pen,” said Ryan Garcia on social media. “You understand this is the night where everything catches up to you and reality sets in.

“This is the type of fight that has been right in my soul since I was a kid. Destiny meets reality. #Shocktheworld,” said Ryan.

Gervonta Davis: “Whisper when you’re speaking on the great. Words will get you spanked.”

It’s time everything is on the line. pic.twitter.com/UkMtI0Vs29

I’m supposed to be terrified over street stuff, go ahead do whatever you want, I live in truth, you want the chain gervonta have it it’s okay, I don’t care, i rather drop your ass in the ring and buy another one ☝️ so flex your street shit on me all you want, i want to win.

Gervonta you know even tho you delete your tweets they are still out there, might as well leave them up buddy 🤙

Kingry getting his chain grabbed by Tank Davis seems to have really shaken him up. When Ryan was talking about the incident, which took place inside of a club, he looked like he was on the verge of bursting into tears.

While Ryan might say it’s no big deal if Gervonta were to snatch his chain, the meaning behind the move says a lot. I mean, if Ryan is letting Tank Davis grab his chain outside of the ring, then what’s going to happen when the two are fighting?

Ryan Garcia has fought twice this year, beating Javier Fortuna and Emmanuel Tagoe in one-sided fights. However, the fight that Ryan wants has been elusive against Tank Davis, and it’s questionable whether it’ll happen. 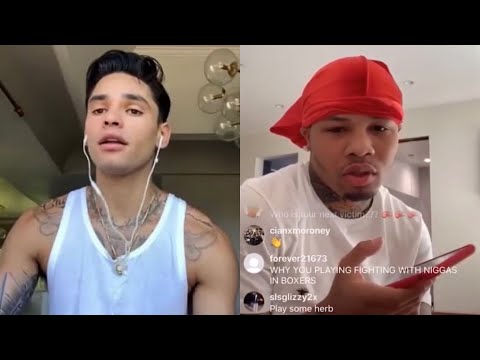