By Brian Webber: Promoter Lou DiBella says George Kambosos Jr won’t be retiring if he loses his rematch with Devin Haney this Saturday night at the Rod Laver Arena in Melbourne, Australia.

DiBella states that Kambosos will be much more aggressive in the rematch with Haney than he was last June when he lost a 12 round unanimous decision, and he expects that it’ll be a different fight.

Should the former unified lightweight champion Kambosos (20-1, 10 KOs) get beaten again by the undisputed 135-lb champion Haney (28-0, 15 KOs), DiBella feels that it would be the result of him dealing with a fighter that is the equivalent of kryptonite for him.

Kambosos has been talking about hanging up his loves if he were to lose the rematch, and obviously, that’s sapped some of the interest in the second fight with Haney.

If Kambosos is seriously considering retirement if things don’t go his way, that’s a sign that he lacks the self-confidence to find success after the Haney rematch. If Kambosos believes he can get back to his winning ways and get another title shot, he wouldn’t be talking about retirement.

“It’s going to force him to fight differently, and it’s going to be a much better fight. So I’m not predicting any result. That would be crazy to do,” said promoter Lou DiBella to Fight Hub TV about George Kambosos Jr in his rematch with Devin Haney on Saturday night.

“He [Kambosos] got beaten in almost every round in the last fight, but he didn’t sell out. He didn’t go to the wall to make Devin as uncomfortable as Devin can be.

“He’s got to do that, and if he does that this time, I think we’re going to see a very different fight. Anybody that’s expecting the same kind of fight as last time, this is wrong. It’s not going to be that. It’s going to be a much better fight.

“He’s got to fight without his regard for his well-being. He’s got to. He’s fighting a guy [Haney] that you can’t box with. You have to make Devin uncomfortable.

“Anybody that doesn’t come to this [Haney vs. Kambosos II] is nuts because this is a better card than the last card. The Moloney fights have better opposition. They’re both in very meaningful fights.

“I have no idea if George keeps fighting,” said DiBella when asked if Kambosos retires if he loses to Haney on Saturday. “I don’t like to hear fighters talking about retirement when there twenty-something years old after a rough fight. I don’t like that.

“That’s the difference in boxing from every other sport, that you fall off the mountaintop in one night. That has an effect on your head, but I think that he’s still a young kid. By the way, Devin Haney maybe his kryptonite,” said DiBella about Kambosos Jr. 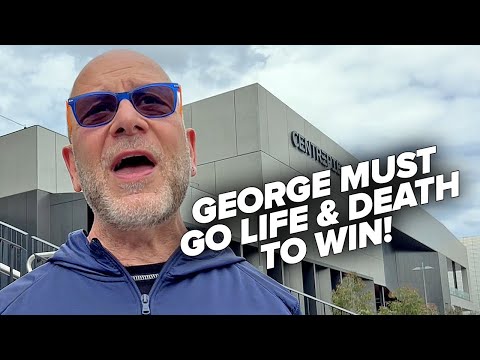