Joe Joyce could face Tyson Fury next summer in 2023

By Barry Holbrook: Promoter Frank Warren says he wants to match Joe Joyce against Tyson Fury next year in the summer, as long as ‘The Gyspy King’ wins his next two fights against Derek Chisora on December 3rd & Oleksandr Usyk in early next year.

Joyce (15-0, 14 KOs) is ranked #1 WBO and is coming off a big 11th round knockout victory over former world champion Joseph Parker on September 24th.

The 2016 Olympic silver medalist Joyce has already beaten Daniel Dubois by stoppage in 2020, and it would be a massive victory if he were to defeat the popular Fury for his belts next year.

Before a Fury vs. Joyce fight can take place, Tyson must get past the old war horse 38-year-old gatekeeper Chisora on December 3rd in Tottenham, and then IBF, WBA & WBO champion Usyk in early 2023.

It’s not a given that Fury because Usyk because he’s a highly mobile, crafty southpaw who could take advantage of how Tyson’s game has slowed in the last couple of years.

Before hooking up with trainer Sugarhill Steward, Fury used to be a mobile heavyweight, but he’s transformed him into a mauler. Also, Fury has put on a lot of weight which has further slowed his game down.

“What we want to next year because it’s what Tyson said; by the way, we want to do the fight next summer. We’re all good for that, provided Tyson beats Derek Chisora and beats Usyk,” said Frank Warren to the Lowdown about Joe Joyce challenging Tyson Fury next summer.

“Joe will fight for a world title next year. That’s what will happen. He will defend his interim title in February, and hopefully, we can get it on in the summer.

“It will have to be someone in the ratings. We’ll have to see who it is,” said Warren when asked who Joyce could face in his next fight. “He is [a nightmare].

“He’s tough, and when I think back to when we signed him when we bought the contract from Richard Schaeffer’s company, everybody was saying they were not interested. I never fought that.

“When we got the fight with Daniel [Dubois], I was asked at the time, I thought Daniel would win it. On the night, he done his job. Daniel suffered a really bad injury, and he done his job. Since then, he’s gone from strength to strength. 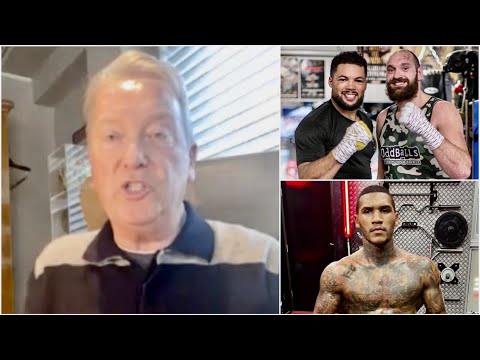 Jamaine Ortiz plans to “shock” the world against Lomachenko »