By Barry Holbrook: Conor Benn’s career could be on the ropes after his two positive tests for the banned PED clomiphene.

A lengthy ban for the 26-year-old Benn would make it difficult for him to return to the form he’d enjoyed. Moreover, you’ve got to believe that when Conor is cleared to fight, fans, fighters & promoters will want him to be tested year-round to ensure that he’s a clean fighter.

If Benn refuses to be tested, people will suspect that he’s hiding something. There’s a very real possibility that Benn’s career could be finished as a major player in the sport, especially if he needs PEDs for him to compete at a high level.

If Benn really did use the drug purposely to improve, it could be difficult for him to bring his game to where it had been recently.

Some fans point out that Benn was a flawed fighter seemingly going nowhere with his career just four years ago when he was going life & death with little-known Cedrick Peynaud.

Despite the tests, Benn (21-0, 14 KOs) still maintains his innocence, and his promoter Eddie Hearn believes that contamination may have occurred with the testing.

What makes it difficult for boxing fans to believe the contamination excuse is that there were two positive tests months apart. It would plausible for some people the possibility of contamination for one test but not two separate tests.

“Basically, he admitted this week that there were two positive tests,” said Gareth A Davies to talkSPORT Boxing about Conor Benn. “He’s blaming contamination in both of the contaminated tests.

“It’s a horrible situation; there’s a lack of transparency. The banned substance was clomiphene, a women’s fertility drug, which was found in his system. I’ve never known a case like this.

“We also found out that he relinquished his boxing license, even though his misconduct charge has been upheld. Why can’t a promoter such as Eddie Hearn cancel an event without the boxer’s say so?

“This week, Hearn said he was powerless to do so while Eubank was still prepared to fight. Where is the moral compass here? The fight should have been pulled. Why did they think they could go on with the event after the failed test?

“Benn could have been very unlucky. There has been talk of clomiphene being in chicken eggs this week. There’s a narrative in my view that adverse findings can just be refuted.

“In the Dillian Whyte case, where he was exonerated on the day of the fight with Oscar Rivas a couple of years ago, set a precedent. Was Hearn pushing the board based on that case?

“Will Benn box with another commission in another territory? He says he won’t. It’s all up in the air. He’s neither banned nor suspended, and this is the murky mess that we find ourselves in.

“This week, we found out that he failed another test for the same thing in July before this one,” said Spencer Oliver about the 26-year-old Conor Benn.

“I don’t know how he’s going to prove his innocence. He’s neither banned nor suspended purely because he decided to voluntarily give up his license.

“A smart move by Conor because he would have got banned because where we go now is it’s going to go into the courts. The defense is now, not that Conor Benn has got to prove his innocence, but they’ve got to prove that he’s guilty.

“It changes things massively. What does that tell you? He doesn’t want to go and sit in front of the board. He’s not willing to try and defend himself and fight his case. He wants to take it legally.

“He’s blaming the Boxing Board. Everyone seems to be blaming everyone, but the facts are the facts. He’s failed two tests for the same performance-enhancing drug that produces testosterone.”

“Whether it’s a mistake or not, whether it’s contaminated or not, it’s still there. It’s a fact,” said Davies about Benn’s two positive tests. “It should have never been made. A small welterweight against a big middleweight.

“They were both going to get really wealthy from it, and I think that’s one of the reasons why they were putting wealth before health. You can never do that in our sport.

“There was a test on September the 1st, and a second one he tested positive for that was revealed to all teams on September 23rd. It took until Thursday, October the 5th, with no questions answered by Eddie Hearn and Kalle Sauerland in front of a huge media gathering.

“For me, it left a vacuum in which the moral integrity of the sport as a business and its duty to care for fighters was ravaged. For me, the fact that they were letting the process play out, to quote Eddie Hearn, allowed the morality and the efficacy of the sport to be pilloried, in my view,” said Davies.

“With what was happening with Conor Benn with a fertility drug in his system, this could have been absolutely disastrous,” said Oliver. “Where is the B sample? How long does it take to get the B sample back? Would that answer all the questions that we need answering?” 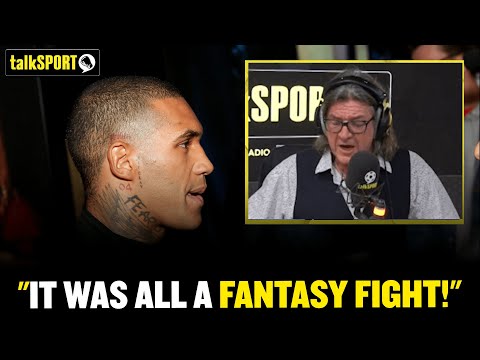