By Barry Holbrook: Promoter Frank Warren reports that the Tyson Fury vs. Derek Chisora III trilogy has already sold 50,000 tickets for their December 3rd fight at the Tottenham Hotspur Stadium in London, England.

Warren believes the fight will sell out. Tottenham Hotspurs Stadium seats 62,850, so it makes sense that the remaining tickets will soon be sold for the Fury-Chisora III trilogy.

As you would guess, boxing fans on social media are shocked that 50K tickets have already been sold for the third fight between Fury (32-0-1, 23 KOs) and the gatekeeper Chisora (33-12, 23 KOs) because the fight is viewed as a terrible mismatch.

“Tyson has shown his superstar power again with a really healthy set of sales numbers yesterday. Over 50k tickets were sold, and we are on course for a sell-out,” said Frank Warren at Frankwarren about the ticket sales for Fury vs. Chisora III at Tottenham Hotspurs Stadium on December 3rd.

“Anyone who wants a ticket to this heavyweight spectacular should get theirs ASAP, as I can only see there being scraps left after this weekend.”

“I’m not scared of anybody. Put me anywhere in the world. Gangsters love me. Bad boys love me, and business people love me because I’m that guy. I’m not scared of nobody,” said Derek Chisora to BT Sport Boxing, reacting to Tyson Fury’s comments.

💫 The @Tyson_Fury show rolls on!

Tickets are flying out with 50,000 already gone! Get yours while you can! Read Franks column on the begin of #FuryChisora 👇#FuryChisoran| 3 December | 🎟 via https://t.co/cELSl6LFEL

“Tyson doesn’t scare me. I’m not scared of any man who bleeds the same way I bleed. You don’t scare me. To the fans at home, it’s going to be an amazing fight. I’m 100% sure it’s not going to be a five-round fight.

“It’s going to go to the wire. That’s what I keep telling everybody. When you make it in life, you park your car for four hours and you don’t get a ticket. That’s when you know you’ve made it.

“Boxing is paying now. They hated me. They hated and bought my tickets. They used to buy tickets to watch me lose. People hated me, but when I fought, people tuned in. That was the model, and that was the trick,” said Chisora. 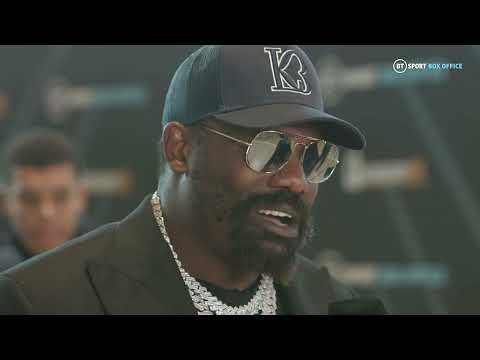 “No one wants to see” Crawford vs. Avanesyan says Eddie Hearn »