By Chris Williams: Keith ‘One Time’ Thurman will reportedly be challenging Errol Spence Jr for his IBF, WBA & WBC welterweight titles on December 17th at AT&T Stadium in Dallas, Texas.

Spence-Thurman is a MUCH better fight on paper than Terence Crawford’s December 10th fight against David Avanesyan. Unlike Avanesyan, Thurman has world championship credentials, and he’s a proven commodity.

Thurman should make it compelling, building interest in the Spence fight with his interviews and trash-talking. ‘One Time’ almost singlehandedly marketed his fight with Manny Pacquiao in 2019.

Spence vs. Thurman is expected to be announced this week on December 17th. It’ll obviously be on pay-per-view, likely on FOX Sports.

The other options Spence had for his December fight were against Jaron ‘Boots’ Ennis and Eimantis Stanionis. Thurman is a far more marketable fighter than those two.

“It has been confirmed that Errol Spence will be facing off against Keith ‘One Time’ Thurman. That’s going to be next. It looks like the target date is December 17th,” said Blue Blood Sports TV.

“It looks like the target date is in Dallas, Texas at AT & T Cowboys Stadium. It looks like December 17th will be the date for the Errol Spence vs. Keith Thurman fight. That fight will be announced this week.

“Keith Thurman will be 34 by the time this fight comes to fruition. He turned 34 on November 23rd. That was the biggest fight at one time for the welterweight division.

“Mario Barrios jumped up from 140 to 147 to face Keith Thurman at 147 in Keith Thurman’s comeback fight. Keith Thurman looked vulnerable in the fight [but won a 12 round unanimous decision], but nonetheless, the WBC made that fight a WBC title eliminator.

“[Years ago], Errol Spence wanted to unify the titles against Keith Thurman, as they are both with PBC, Premier Boxing Champions, and they both fight on Showtime and FOX Sports, so it would make it easy. But Keith Thurman somewhat gave Spence the runaround.

“Thurman wanted to let the fight marinate. He thought it was his Floyd Mayweather – Manny Pacquiao fight. Thurman went into a two-year hiatus where he was stripped of his WBC title due to inactivity,” said Blue. 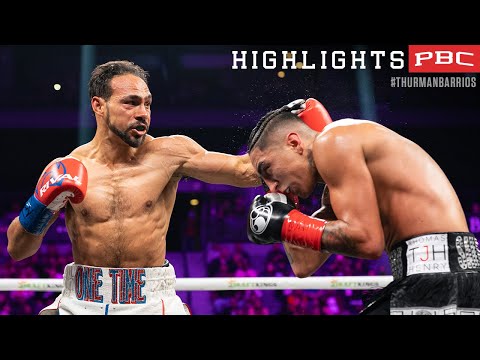 Who Were the Best of the Best Heavyweight Champs? »