By Robert Segal: Dan Rafael says the drug that Conor Benn tested positive for, clomifene, is one that is “hardcore doping stuff.”

Rafael states that Benn (21-0, 14 KOs) needs to admit his wrongdoing because boxing fans aren’t going to believe him if he insists that he didn’t do anything wrong. Benn has got to fess up because he’s the captain of his ship and is responsible for whatever gets into his body.

Benn was supposed to be fighting the bigger, stronger Chris Eubank Jr this Saturday night at the O2 Arena in London. The fight has now been postponed, according to his promoter Eddie Hearn, after the British Boxing Board of Control refused to sanction it.

Hearn gave a speech earlier today saying that Benn isn’t suspended. However, Hearn didn’t say how the banned substance got into Benn’s body, nor did he reveal when his B-sample will be examined & the results released to the public.

“In the case of Conor Benn, the substance that he tested positive for is hardcore doping stuff that is used to do bad things,” said Dan Rafael to Boxing Social about Conor Benn testing positive for the banned drug clomifene.

“They [marijuana and weight loss drugs] have a lot less severity than if you were caught with this type of substance. I’ve been writing about and talking to people about drug testing for 20+ years.

“VADA is the agency that catches folks cheating on a regular basis, and it just didn’t line up that you could have this fight go forward under those types of circumstances.

“People are, at least in America anyway, we’re a forgiving country. If you fess up to your mistakes, usually you get another chance. But you have to show some contrition. You have to accept; you have to admit; you have to explain yourself.

“Do a little bit of penance and then make the big comeback. I don’t think Conor Benn’s career is over or completely ruined, but if he goes through the rest of his career trying to say that this was not real, or this was fake, or ‘I didn’t do anything,’ or whatever, I don’t think most people are going to believe him.

“Either come clean and say ‘this is what happened. I apologize. I shouldn’t have done this,’ or if you truly didn’t take it on purpose, you better go through every single person that you’ve been in contact with that’s giving you something that you’ve put in your mouth that would get into your system.

“The test was from, according to my sources tell me that the test returned was from a urine test. So you have to know what’s in your body. So he’s got two choices. Either come clean and say that you took it and how you got it, or you better figure out who did give it to you and take care of that business also. That’s the way you can come back.

“It’s not a matter of making the record clean. By the way, I’ve seen tons of fighters that had positive drug tests. Maybe it’s a black mark on their record to some degree, but they were able to bounce back,” said Dan Rafael. 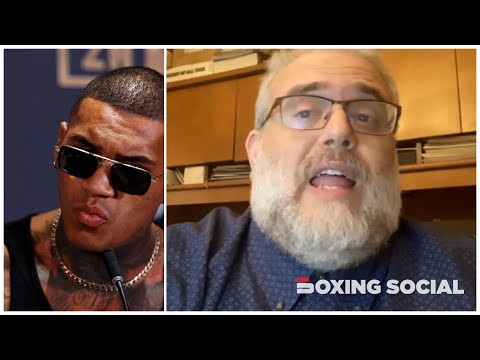