Conor Benn: “I am a clean athlete”

By Jack Tiernan: Conor Benn says he’s a “clean athlete” and that he’s “shocked” by everything that’s occurred following his positive test with VADA for a banned drug ahead of his now-canceled fight with Chris Eubank Jr.

Benn’s promoter Eddie Hearn says he’s known about his positive test for a “couple of weeks.” The information was only revealed when it was leaked by the Daily Mail on Wednesday. Hearn isn’t saying why Conor Benn’s B-sample hasn’t been tested. The question is, will Benn’s B-sample ever be revealed?  If so, will the fans be told about the results, or will it not be disclosed?

It’s unknown if the public wouldn’t have been told about Benn’s positive test before Saturday’s fight. That would obviously be troubling if it were the case.

Does the boxing public have the right to know the results of the drug testing being done on boxers by the agencies?

“Both companies have known about this for a couple of weeks because they’ve had to have it all analyzed. Obviously, it broke with the Daily Mail,” said Eddie Hearn to Boxing Social about Conor Benn’s positive test.

So there it is. Hearn revealed that they’d known for weeks about the positive tests.

During today’s brief press conference, Hearn said very little about the Eubank Jr-Benn fight, and he didn’t allow questions to be asked by the media.

“For it to have gone ahead on Saturday night would have been one of the worst moments this country has ever seen regardless if people want to see the fight or not,” said Gareth A Davies to Boxing Social about the Eubank Jr vs. Benn fight.

“They spoke to Chris Eubank Jr about it [Benn’s positive test] behind the scenes. He knew about it, and he accepted it and accepted the reasons. He said he wanted to go ahead with it.

“Maybe he does because he doesn’t think Conor Benn can hurt him. He’s a fighter, but his own safety is at risk here. If something happens to him, it’s his safety and the safety of the entire sport. It has to be safety first. It has to be boxers first. 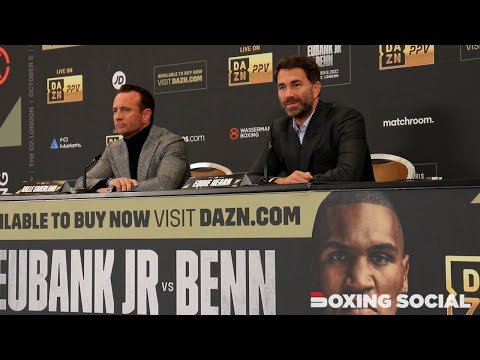