“Chisora is every bit as dangerous as Usyk” says Tyson Fury

By Charles Brun: Tyson Fury says he feels that Derek Chisora is “as dangerous as” the unbeaten unified heavyweight champion Oleksander Usyk. Moreover, Fury states that Chisora fought well enough to deserve a draw in his fight with Usyk in October 2020.

It appears that Fury is trying to justify his choice of Chisora for his next fight by smothering him with underserved praise so that the boxing media won’t endlessly trash him. So that you know, Chisora’s record in his last four fights is 1-3.

Chisora looked as basic as always in getting outboxed by Usyk, who used movement, angles & combinations to dominate the aging fighter.

Obviously, Fury needs to build Chisora up to take the heat off him should he choose to fight him next because there will be a huge backlash if he faces him next.  Fans don’t want to see a trash fight like that, especially if they’re going to have to pay to see it.

Tyson Fury on potentially fighting Derek Chisora again in a trilogy next: “In my opinion Chisora at least got a draw with Oleksandr Usyk, so I see Chisora as every bit as dangerous as Usyk – if it is Chisora,” said Tyson Fury to Secondsout.

“I thought Chisora deserved a draw at minimum. Chisora is no pushover. If you’re not on your A-game, Derek will beat you.

“There’s a few southpaws that I’m looking at, which would obviously help,” said Fury about other potential opponents for his next fight in December.

Joshua had his chance

“They had the contract for two weeks and didn’t sign it for a few commercial reasons. If you’re going to let a sponsor get in the way of the biggest fight in British boxing history, then you need to regroup,” said Fury about his failed negotiations for a fight against Anthony Joshua on December 3rd.

“They’ll always find a reason not to fight the ‘Gyspy King.’ I can’t blame them. I would have gone through him like a hot knife through butter inside three or four rounds anyway.

“I’m over that now. The deadline is a fact that we’re eight weeks away from a fight today. So they didn’t sign it, which they didn’t; how close do you want to leave it? Two weeks before? If you give them a deadline of two years, they’re still not going to make the fight.

“We know Joshua wouldn’t fight Wilder for 50 million dollars. That was real, and he s*** himself,” said Fury. 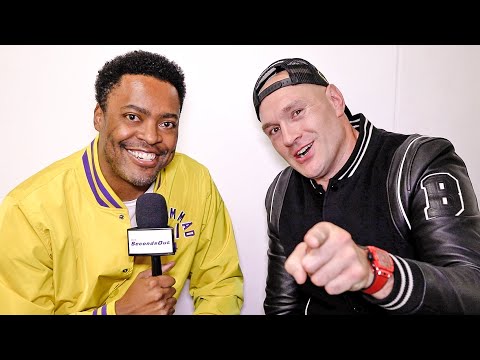