By Dan Ambrose: Canelo Alvarez has been talking for weeks about how he plans on knocking out Gennadiy Golovkin for their trilogy bout tonight at the T-Mobile Arena in Las Vegas.

If you saw how bad Canelo looked in his last fight against Dmitry Bivol, he’s going to have a really difficult time putting Golovkin down or hurting him badly enough to where the referee or corner will halt the fight.

Canelo’s stamina was horrible against Bivol, and it’s doubtful that he’s made improvements in that area. The Mexican star says he did a lot of running during training camp, but he’s always had stamina problems throughout his career, even before he developed knee issues.

It’s difficult to picture Canelo scoring a knockout over the steel-chinned Golovkin, as he failed to hurt the Kazakh in the 24 rounds that the two have shared.

Canelo’s best bet for stopping Golovkin is to go after him early with body shots in the same way Ryota Murata and Sergiy Derevyanchenko both did.

Those guys had success going to the body of GGG in the first half of their fights. However, in the second half of those fights, Golovkin punished both guys and made them think twice about going to his midsection.

“I think if this fight does get stopped, it’s because of body shots to the midsection of Gennadiy Golovkin, and it might even take the referee or Golovkin’s own trainer to step in,” said Chris Mannix to DAZN.

“I don’t see a knockdown of Canelo. He’s been a pro since he was 16 years old, and he’s never been down,” said Sergio Mora. “That thick neck, it helps, and that fighting style.

“Canelo, earlier in his career, we were wondering if he would turn out to be a little bit chinny,” said Chris Mannix. “If you remember that fight against Jose Miguel Cotto early in his career, his first fight in the U.S.

“I was wondering if he would have the kind of chin that would make him a championship fighter? He has that and then some.”

“In the first round of the Canelo-Golovkin 2, we were all kind of impressed how Canelo took the fight to Golovkin. It did take longer than 60 seconds.”

“Golovkin is on the wrong side of 40, and Canelo improved in their rematch. But in these kinds of rivalries, it’s dangerous to underestimate the old lion,” said Max Kellerman to ESPN.

“It would be really foolish to underestimate Golovkin, especially with the way he fought him in the first two fights,” said Mike Coppinger. “Yes, that was four and five years ago, but Golovkin won more of those rounds than Canelo did, and these guys hate each other.

“When I spoke to Canelo on Wednesday, he said, ‘I’m going to punish Golovkin. He’s a phony, and I hate him.’ So, I think we’re going to have a great fight.

“You would hate that Canelo is not underestimating GGG,” said Kellerman.

“What stands out to me is Canelo is now accepting his loss to Bivol. At first, he said he thought he had won. Of course, he didn’t win. I thought he won two rounds against Bivol in May,” said Coppinger.

“Canelo is accepting his loss now, which I think is great, and I think he seems more motivated than ever. The most important thing is, that he hates Golovkin. He does really, truly hate him. This is not pre-fight bravado, trying to sell a fight.

“He doesn’t like Golovkin dating back to when he tested positive for a PED. He said it was from tainted meat consumed in Mexico. Golovkin said afterwards that he noticed track marks on Canelo.

“Canelo can’t stand him and says that Golovkin is a phony, a fake, and wants to punish him. I do really think he means that. He’s not going to try and box, dance, and move.

“Bivol is probably the best light heavyweight in the world, and he has the most technically difficult to beat style.

“If you keep moving up in weight, there’s no shame in eventually losing to the best guy in the biggest division you competed in. I can imagine the loss would motivate Canelo against GGG, and Canelo is favored to win.

“Do you think the loss to Bivol will have an effect on Canelo in this fight?”

“I think it’s actually going to help Canelo because he realizes rationally that he was moving up in weight against a really tricky fighter, and against Golovkin, he was very comfortable against him,” said Coppinger.

“He knows his style, and he knows there’s not going to be any surprises, and I think he’s more motivated than ever. There was a lot of talk that Canelo wasn’t really that focused on Bivol last time. Maybe he was reading a little too much of his own hype.

“He was playing a lot of golf. He’s much more focused this time around because he said this week that he wants to finish Golovkin’s career. Golovkin took great respect to that, saying, ‘Who is Canelo to say he’s going to finish anyone’s career? That’s my decision.'”

“Let’s talk about Gennadiy Golovkin. What did you take from your time with him?” said Kellerman.

“He was in a bit of a surly mood and a playful mood as well,” said Coppinger. “I think he feels a bit disrespected. He knows people are accounting him out.

“When I asked him if he likes being the underdog, he didn’t seem to accept that he is the underdog. He must know deep down that he is. I think Golovkin must know this could be his last big fight.

“He says he has no plans of retiring afterward no matter what, and this is his last fight with DAZN. He’s going to have a lot of flexibility. One thing that is important to note is this is his first fight at 168 pounds. He’s been making 160 since he was in the Olympics in 2004.”

“A long time at the weight, sometimes an older fighter can benefit from a move up in weight,” said Kellerman. “It seems to me that this fight has the potential to affect GGG’s legacy more than Canelo’s. If he loses and loses the series to Canelo.

“Yes, he’s the older fighter, I get it, but we’re going to look back and ask who did Golovkin ever beat? If he wins, we’ll say, ‘He really did beat Canelo two out of three.’ The first fight was a draw, but most people think GGG won.

“It wasn’t his fault that when he was in his prime, no star middleweight would get in there with him except for Canelo. Do you agree that this potentially affects GGG’s legacy more than Canelo’s?”

“I think Canelo has the stronger resume for sure. He has several big wins and undisputed at 168, and world titles in four weight classes,” said Coppinger.

“Golovkin is a unified middleweight and has had a legendary run at middleweight, but he didn’t beat any top guys other than Danny Jacobs. That was a pretty close fight. I actually scored it for Danny Jacobs.

“Yeah, I think it’s bigger for Golovkin’s legacy, but on the flip side of that, if Canelo loses to Golovkin at 40 years old when he’s a five-to-one favorite, that’s going to leave a lot of question marks, too,” said Coppinger.

“It will, but people look for trends in careers. Canelo was winning and was undefeated for a long time after the Mayweather loss, and then he started losing.

“He lost to Bivol and loses to GGG. I think that, as you said, the deeper resume because Canelo used his star power and the purses it meant for his opponents to attract better fighters than GGG was able to attract and was seen as very dangerous. Maybe the risk wasn’t worth the reward when GGG was in his prime,” said Kellerman. 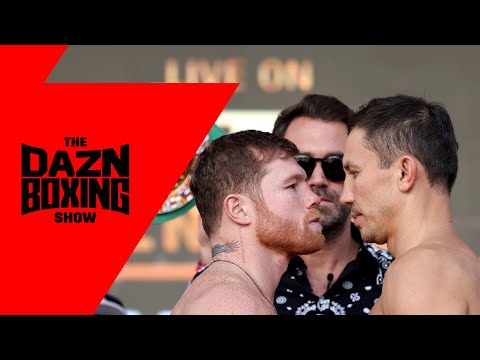