By Jack Tiernan: Tyson Fury was impressed with the performance from Joe Joyce after watching him score an eleventh round knockout of his gym mate Joseph Parker last Saturday night at the Manchester Arena in Manchester, England.

Boxing fans would like to see Fury test his theory that Joyce couldn’t land on him by singing to fight him. They don’t want to see Fury fighting Manuel Charr if he can’t get the December 3rd fight with Anthony Joshua made.

With that said, Joyce landed well against Parker, who has faster hand speed, hits harder, and is more mobile than Fury.

If Joyce was able to land his shots against Parker, it stands to reason that he’ll have the same success against Fury because he’s not as fast as the New Zealander.

“He wouldn’t land one punch on me in 12 rounds. I don’t think he could hit me with a f***ing handful of rice,” said Tyson Fury to FrankWarren_TV about Joe Joyce.

The 271 lb Joyce is actually heavier than the 264-lb Fury, and he throws more punches, hits harder, has a better engine and the superior punch resistance.

In a lot of ways, Joyce is the better fighter than Fury, and is more capable of beating Oleksandr Usyk and Anthony Joshua than him.

“From a fab point of view, it was a very entertaining fight,” Fury said about Joyce’s clash with Parker. “Both men did extremely well. Fair play to Joe Joyce. He took out a very game, a very strong and fit Joseph Parker, and put himself in the top five for that, in my opinion.

“I think he [Joyce] beats Joshua; I think he beats the middleweight [Oleksandr Usyk]. He might have a problem with Wilder’s speed and power, and I don’t think he can lace my boots.

“I was very impressed. He was big and strong and game,” said Fury. 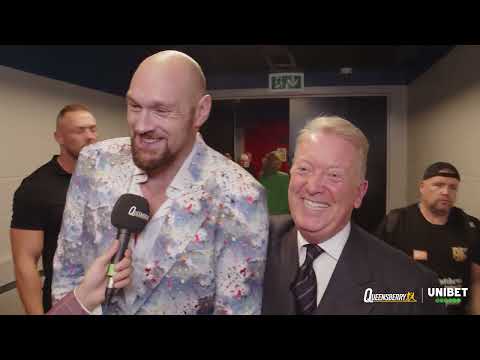