By Allan Fox: Retired stars Manny Pacquiao and Floyd Mayweather Jr went at it in front of the media today in Japan. It seemed a little odd, and the 45-year-old Mayweather and 43-year-old Pacquiao would just happen to meet in Japan.

Mayweather has been out of the ring in terms of a real fight since 2017, and the younger boxing fans have never seen him in action. To them, he’s just an old guy who won’t let go of the sport despite his advanced age. 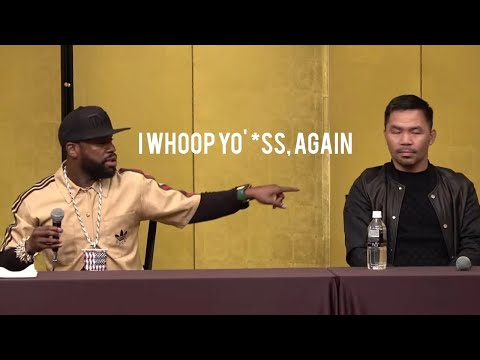 This was likely a staged event to begin the early promotion for an exhibition match to peddle to the boxing public on pay-per-view.

However, it’s questionable whether there’s any interest in fans in seeing Pacquiao and Mayweather spar for 10 to 12 rounds in an exhibition match at this point.

Their previous fight in 2015 was unwatchable, as Mayweather played it safe, throwing jabs and moving all night against an injured Pacquiao. After the fight, Pacquiao pushed for a rematch, but surprisingly, Mayweather wanted no part of a second fight.

“He’s older than me; I’m still young, so what I have done and accomplished in boxing is one of a kind,” Pacquiao said. “To win [titles in] eight different weight divisions is not easy.”

It’s doubtful that fans would be willing to pay to see Mayweather and Pacquiao fight again. It’s been too many years since they last fought, and people no longer view them as relevant as they did back in 2015. If they fought now, it would be another old timer’s fight, and that’s really boring.

It appears that Mayweather’s opinion has changed about not wanting any part of a second fight with Pacquiao. Some would say that Mayweather’s dwindling PPV numbers for his exhibition matches have made him desperate for a big cash fight against Pacquiao and Conor McGregor. Conor he as already said he’s not interested in fighting Mayweather again, so Pacquiao is in the spotlight.

Mayweather is fighting a three-round exhibition match tonight against Mikuru Asakura in Saitama, Japan. Thus far, the interest from U.S fans in Mayweather’s exhibition against Mikuru has been little. Fans see it as another mismatch for Mayweather, and they’re not interested in purchasing it on pay-per-view.

Of course, Mayweather and Pacquiao’s meeting in Japan today might help entice some of the older fans to want to open up their pocketbooks to order Floyd’s exhibition tonight. If not for that, Mayweather-Mikuru will likely be seen by very few fans in the States.

Pacquiao will be fighting an exhibition match against DK Yoo in December and Jaber Zayani in February.

Mayweather’s comment about him being the “best” suggests that he’s out of touch with reality. He’s not the best, and he would get destroyed if he fought the likes of Errol Spence Jr, Jaron ‘Boots’ Ennis, or Terence Crawford.

In terms of historical significance, Sugar Ray Leonard and Tommy Hearns were both better welterweights than Mayweather. When Floyd fought at 147, he played it safe, fighting beatable guys for the most part, and staying away from Pacquiao until he’d already been beaten by Juan Manuel Marquez and Tim Bradley.

Only after Pacquiao started showing signs of slippage, Mayweather finally fought him, and it was a terribly boring fight with many boxing fans feeling they got ripped off.