By Robert Segal: Mayweather Promotions CEO Leonard Ellerbe came to the defense of Gervonta ‘Tank’ Davis today when he was attacked on social media over his claims of making “5x” more money than his counterpart Devin Haney.

When someone from the comment section questioned whether Tank Davis made $15 million for his fight against Rolando ‘Rolly’ Romero, Mayweather CEO Ellerbe was off the leash, attacking the poster in response.

Given that Haney made $3 million for his last fight against George Kambosos Jr. in June, Gervonta (27-0, 25 KOs) would need to have made $15M for his title defense against Rolly Romero for him to have earned “5x” more money than Devin.

The last thing your hating ass should be concerned w is how much Tank makes. Just know he makes way more than his comp and it’s not nowhere close. 🤷🏾‍♂️ https://t.co/xvBzOEYwti

“It’s a beautiful fight. To me, they’re both very good fighters, and right now, they’re both at the top of their game,” said Roy Jones Jr to Fighthype about Ryan Garcia and Gervonta ‘Tank’ Davis.

“I think Tank has a few more belts under his belt, but I think both of them are very good quality fighters, and I think it’s a great fight.

“I don’t see Ryan as the underdog because of the explosiveness in his punches,” Roy Jones Jr. continued. “Ryan is a very explosive puncher, and people don’t understand.

“He goes down too, but he’s a very explosive puncher. Tank is too, but Ryan is a puncher. You can’t underestimate Ryan’s punching power. I know he’s been down, and we haven’t seen Tank down, but Ryan does  have the punching power to get him out of there.

“The title fight is at 140. Tank knows how to deal with it already. I don’t think the size of [Ryan Garcia] will be an issue. The left hook, but the right hand will probably be a better weapon for him [Ryan].

“Crawford-Spence right now because they’re both undefeated and at the top of their division,” said Roy when asked which fight he’s more excited about, Crawford vs. Spence or Tank vs. Ryan.

“Tank is at the top of the division, but Ryan hasn’t gotten there yet. Ryan is on the way to the top. Crawford and Spence are both at the top,” said Jones Jr. 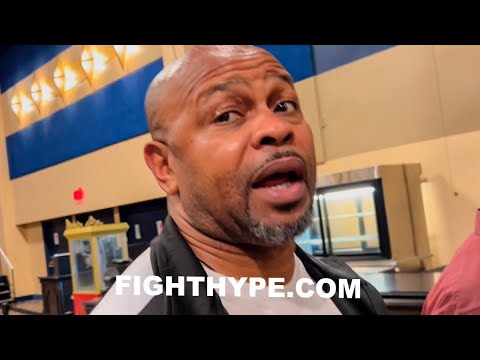 
« Tyson Fury wants Joshua in December if no Usyk fight