By Robert Segal: Regis Prograis feels that the Errol Spence Jr. vs. Terence Crawford fight has marinated enough because he’s worried that it could over-marinate.

Already, a lot of boxing fans are losing patience with the slow progress the negotiations are going between IBF, WBA & WBC welterweight champion Spence (28-0, 22 KOs) and WBO champion Crawford (38-0, 29 KOs).

As Prograis points out, we just barely dodged a bullet with Spence getting in a car crash in 2019. Had that accident been worse for Spence, it would have foiled any chances of a fight against Crawford.

If the fight isn’t going to happen, the fans at least want to see Spence & Crawford back in the ring defending their titles. Crawford hasn’t fought since last year, so it’s important that he gets back in the ring soon.

Prograis has twice mixed it up with Spence in the Texas state championships when he was an amateur, losing both times. He was impressed with the power of Spence and his ability to go to the body.

Spence & Crawford will move up to 154 if they fail to set up a fight between them, as they’re both interested in becoming undisputed at junior middleweight.

“I’m cool with him, but I’m cool with Crawford too,” said Regis Prograis to K.O. Artist Sports about him knowing Errol Spence Jr. and Terence Crawford.

“It’s just a fight that I want to see, honestly. I’m just like everybody. When it comes to this, I’m a fan like everybody else. I just really want to see this fight,” Prograis continued about the Spence vs. Crawford clash.

“You can’t marinate this fight no more. I feel like they have to be next because sometimes you over-marinate it, and then anything can happen; somebody could lose. It almost got messed up when Errol had the car crash.

“Nobody likes southpaws. Even southpaws don’t like southpaws. That’s why it’s going to be so interesting. Crawford, he can switch and stuff. For me, this is like a historical fight.

“This isn’t just a fight that is going to be good right now. This is a historical fight for me, and I’m a boxing historian. I know about the history of fights all the way back to Joe Gans, Joe Louis, and Henry Armstrong.

“For me, this is a historical fight that has to happen. I just want to see it. Both of them are so good. Errol, his style-wise. I fought him twice in the amateurs, and I know how good he is, and he’s really strong and stuff.

“He hit me,” said Prograis when asked how he found out Spence was strong. “The first fight we fought was in the Texas state Golden Gloves championship in the finals.

“This was Errol at the time. Errol was like a three-time national champion, and this was my first. I started boxing when I was 17, so my first time ever stepping up. My coach was like, ‘Man, if you get dropped, do this.’

“I was like, ‘What? Ain’t nobody. Are you crazy? I don’t care who this dude is. This could be Mike Tyson. I don’t think I’m going to get dropped.’

“The fight was really close. The fight was fought in Dallas, which is where he lives at. I’m not going to say I won the fight, but when I got out of the ring, he said, ‘You won that fight.’

“It was a close fight, but I felt like I lost the fight. How I found out he’s strong. He taught me a lot from going to the body. He went to the body. Errol knocked out everybody except me.

“We had four fights each. He knocked out three people before he got to me. That’s why my coach was like, ‘S***, if you get dropped, look to the corner.’ I said, ‘Bro, I’m not getting dropped. I don’t care what he did to the last dude’ because he was lighting them up left and right. He was knocking everybody out.

“Then we fought and locked horns. We just went at it and fought. Then after that, people had a lot of respect for me. That was my first time fighting on that scale like that.

“Yeah, it was a good fight. The second time, he adjusted on me. That was clear. He definitely beat me. It was definitely clear that time for sure. Spence is the type that beats you up, he beats you down.

“He’s the type of fighter that wears you down, but Crawford, skill-wise, his skills are so high. Another thing, Spence is a natural 147. Is Crawford a natural 147? Is Crawford strong enough? I don’t know.

“There’s a lot of questions, but I just want to see the fight. Wherever it’s at, I’m paying, and I’m going. If I’m not in camp, I’m paying and going to the fight,” said Prograis. 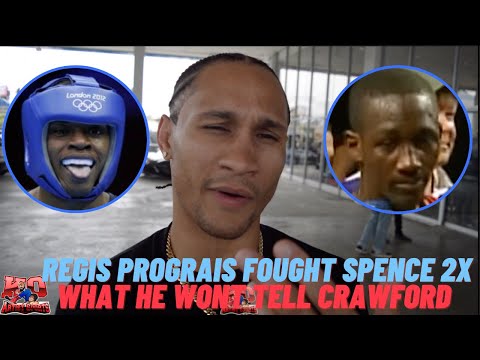