By Geoffrey Ciani: Coming up on October 15th, in a bout that will be televised on Fox PPV, heavyweight contender Robert Helenius will square off against former WBC heavyweight champion Deontay Wilder.

This is an especially interesting match-up at this particular point in time. You have Wilder coming off his only two losses, back-to-back stoppage defeats he suffered against heavyweight world champion Tyson Fury; and then you have Helenius having recently resurrected his career with back-to-back victories against the previously undefeated contender, Adam Kownacki. 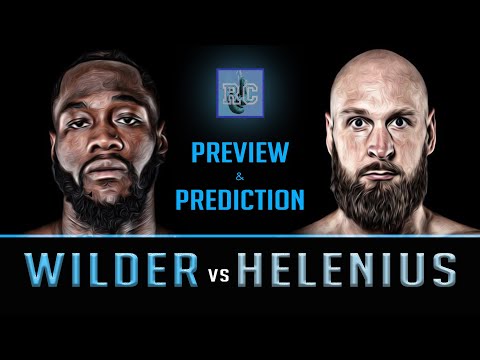 Going into his first bout against the undefeated Kownacki, Helenius was generally viewed as washed up and past his best. But like a phoenix rising from the ashes, Helenius resurrected his career with a fantastic showing. On the other hand, the former WBC champion has lost two in a row against Fury, which was a major setback that happened after Wilder had made 10 consecutive title defenses of his championship belt, including the draw he had in his first bout with Fury.

The biggest question going in is how much did the Fury fights take out of Wilder, both physically and mentally. If Wilder proved nothing else against Fury, he proved that his heart and courage are beyond reproach. Wilder also has a nuclear right hand, and he has dropped every opponent he has ever faced, including the 4 knockdowns he scored against Fury during their trilogy.

Another big question concerning this bout is whether Kownacki was as good as advertised, or whether his style provided a favorable clash for Helenius. Once upon a time Helenius was a promising contender who had beaten 3 former champions inside the distance in beating Lamon Brewster, Sam Peter, and Sergey Liakhovich. But since that time, Helenius had lost three times prior to his big chance against Kownacki.

So who will win the upcoming October 15th battle between heavyweight contenders Deontay Wilder and Robert Helenius.

This edition of Rummy’s Corner will attempt to answer that question while also providing a quick preview for the upcoming heavyweight showdown between The Bronze Bomber and The Nordic Nightmare. Please watch and enjoy the video for one man’s opinion. This is Rummy’s Corner (produced and narrated by Geoffrey Ciani).