By Charles Brun: Chris Eubank says he’s pulling his son out of his scheduled October 8th fight against Conor Benn due to the 157-lb catchweight, which he feels is unsafe.

The well-accomplished British boxing legend Eubank doesn’t want to risk seeing his son Eubank Jr. (32-2, 23 KOs) drop below 160 pounds for a fight against welterweight Benn (21-0, 14 KOs) on DAZN pay-per-view at the O2 Arena in London.

It’s unclear at this point whether the 32-year-old Eubank Jr will follow his famous dad’s wishes and lose out on millions of dollars for his lucrative fight against the inexperienced Benn.

On paper, there’s not a lot for Eubank Jr to fear because Benn has been fighting godawful opposition at welterweight, and he arguably was already beaten by little-known Cedrick Peynaud in 2017. Benn was given a highly questionable six round decision against Peynaud,  but he looked like the clear loser.

The catchweight of 157 lbs is bad enough, but when you factor in the rehydration clause, which will limit how much weight Eubank Jr can gain back on the morning of the fight, it’s a double whammy for him.

Why on earth Eubank Jr ever agreed to both of these conditions for the Benn fight is unknown. He shouldn’t have. Having the catchweight is bad enough, but the rehydration clause that Eubank Jr agreed to is him asking for trouble.

I mean, much of a handicap does Benn need? If he’s not good enough to beat Eubank Jr at 160, then that’s how it goes. In life, smaller guys don’t get handicaps when they’re fighting larger people on the street. Why does Benn need a handicap to fight Eubank Jr?

If he’s good as he purports to be, why the catchweight and rehydration clause? Would his father, Nigel Benn, ask for these things if he were fighting a larger fighter? I think not.

“My son’s life cannot be put in danger. I’ve already lost one. It can’t happen again,” said Chris Eubank to the Daily Mail about his intention to try and pull his son, Eubank Jr, out of his scheduled October 8th fight against Conor Benn.

“I’ve given him my direction. If he [Eubank Jr] doesn’t want to follow it, he will be dragged along.

“This is modern-day “gladiating”; this is not a plaything for the audience. We have to be strict otherwise, lives are put in danger,” said Eubank. 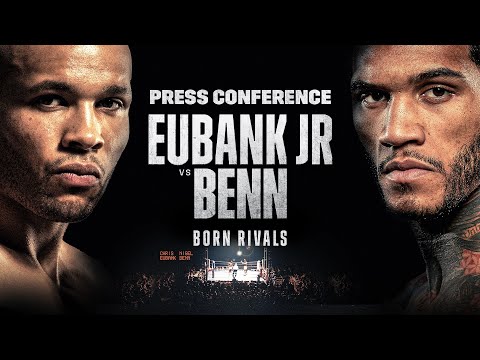