To top it off, Plant says he’ll fight a rematch with Canelo Alvarez in 2024, assuming he wins those three tough fights.

That will be a great accomplishment for Plant if he defeats Dirrell, Benavidez, and Charlo to earn a second fight with Canelo.

Beating Canelo (58-2-2, 39 KOs) would be icing on the cake for former IBF 168-lb champion Plant, as it would give him revenge for his 11th round knockout loss to the Mexican star last November. That was a fight that Plant was competitive in before he ran out of gas around the tenth round.

Once Plant faded, Canelo took advantage of the situation to stop him in the 11th. With a better gas tank, Plant might have won that fight, and his career would be looking a lot brighter right now.

Dirrell (34-2-2, 25 KOs) is a tough foe with plenty of pop in both hands, and he’s not someone that Plant can afford to look past for this fight.

Plant and Dirrell will be the co-feature bout on the Deontay Wilder vs. Robert Helenius card on FOX Sports pay-per-view on October 15th at the Barclays Center in Brooklyn, New York.

Dirrell’s career has slowed since his ninth round knockout loss three years ago at the hands of David Benavidez in September 2019.

Since that loss, Dirrell has fought only twice in the last three years, battling to a 12 round draw against Kyrone Davis in February 2021 and stopping Marcos Hernandez in the fourth round last November.

“I’m approaching this fight just like any other fight. The fact that I’m not bowing down to him, scared of him, or worried about anything he’s got going on. Maybe it rubs him the wrong way,” said Caleb Plant to Fight Hub TV.

“I’ve seen some of those where everything he has to say and his dad says. A lot of that is bull s***,” said Plant about David Benavidez, saying that none of the top fighters at 168 want to fight him.

“I don’t know if you saw the video that came out where we tried to make that fight [with Benavidez] happen before, and Samson said it wasn’t the time, and it needed to be more money.

“They try to spin the narrative. I don’t care what people say. After I win this fight, I’m set to get the biggest fights that can be made, whether that be Charlo, whether that be David. They like to have bull s*** about the amount of money that they want in comparison to what their opponent would get being me.

“They bull s*** a lot. I wasn’t scared to fight Jose Uzcategui with only 16 fights. I’m not scared to fight Canelo. I could have picked a sparring match of a fight coming back now, but I’m not comparing Dirrell to David. But coming off a layoff and a loss, most fighters would have picked a sparring session of a fight coming back. I chose the biggest fight that could be made.

“As far as fear being scared, come on, Marcos. Knock it off. By the end of 2023, if it was up to me, I would stop Dirrell, I would get a fight with Charlo or Benavidez, and then get the fight with the other one.

“I would have three good wins under my belt going in 2024 looking for that rematch with Canelo. That’s what I really want. I’m looking to cement my legacy as the best super middleweight of this era.

“I’m still on a mission looking to accomplish that, and I’m going to. I’m not scared of him [Canelo], and I’m damn not scared of David Benavidez. I want to cement my legacy. Boxing is important to me. I work really hard for this stuff.

“I don’t know what his problem is. If he thinks he hates me now, he’s going to really hate me on October 15th because I promise you, I’m going to give him a vicious a** whopping.

“He’s not on my level. Nothing he does. His defense, his footwork, his IQ, his combinations. There’s nothing he can bring to the table that is going to put me in the position that he wants me.

“He don’t work as hard as me; he’s not as disciplined as me. He doesn’t keep his weight in check year around like I do. There’s nothing in his game where he’s going to be able to outshine me.

“He knows that. I think that’s one thing that has him flustered at me. It’s not like he knows me personally to hate me. So why else would you dislike somebody? He knows he can’t f*** with me.

“I think that’s what has him bothered. He can be mad all he wants. He’s not going to do s*** about it. The scorecards were close before the stoppage,” said Plant about Dirrell’s last fight against Marcos Hernandez last November.

“That guy was a blown-up middleweight who was getting stopped at 154 pounds. Before that, he had a draw with a middleweight, Tyrone [Davis], who is a good fighter. He’s a middleweight as well.

“Before that, Yildirim was winning that fight and should have won that fight. That’s why he got the Canelo fight before Dirrell did. Before that, he was getting his a** whopped by David [Benavidez].

“So, he’s not on my level. That’s the plan [to stop Dirrell]. Putting the ‘I’ll never let a white boy beat me’ stuff up. Everything he said, once I whoop his a**, it’s going to feel real good.

“Skin color don’t win fights. What’s in here [brain] wins fights, and what’s in here [heart] wins fights. Yeah, that’s the plan for sure to get busy. After this fight, I’ll give everybody some more insight. But yeah, in 2023, most definitely,” said Plant about wanting to fight three times,” said Plant. 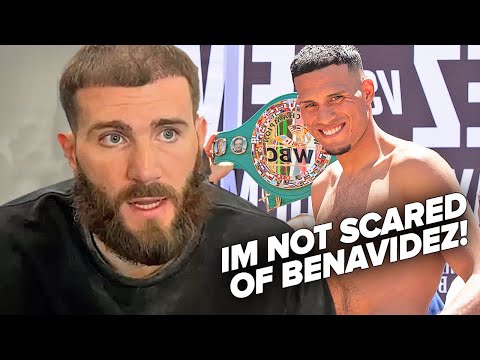 
« Caleb Plant: “I’m going to whoop Dirrell’s a**, then Charlo or Benavidez”