By Sean Jones: Jose Benavidez Sr says Canelo Alvarez’s decision not to face Mexican fighters is because he’s afraid to have his “legacy” ruined by them.

Benavidez Sr. says Canelo’s recent loss to WBA light heavyweight champion Dmitry Bivol didn’t hurt his popularity because he’s not a Mexican fighter. So the defeat didn’t impact Canelo in the same way it would have if Bivol were Mexican.

According to Benavidez Sr, Canelo is “scared” of fighting his son David Benavidez. That’s a fighter that has been chasing Canelo for years, trying to get a fight against him with no luck.

Jose Sr. says he’s not worried about Canelo avoiding his son Benavidez because he’s still young at 25, and he’ll either fight for the vacant titles once the belts are given up, or he’ll face the Mexican star when the match is forced on him.

“You got to understand the reason he doesn’t want to fight any Mexicans because he lost to Bivol. He didn’t really lose. Losing to a Mexican, that would take all his legacy away,” said Jose Benavidez Sr to Fighthype about Canelo Alvarez saying he’s not going to fight any Mexicans.

“That’s in his mind; that’s what he thinks. So that’s why he doesn’t want to fight a Mexican fighter because he’s not going to look good against a Mexican. That’s my opinion.

“Mexicans come and give it everything. They leave their heart inside the ring, and he doesn’t want to face those fighters.

“We’re not worried. David is only 25 years old,” said Benavidez Sr on Canelo’s decision not to fight Mexicans affecting David Benavidez. “Actually, we’re trying to fight in November or December. We’ve got a lot of things going on.

“We’re not worried. He’s super young. Sooner or later, he’s [Canelo]  going to have to vacate those titles, or we’re going to have to fight for them. There’s no other way,” said Benavidez Sr. 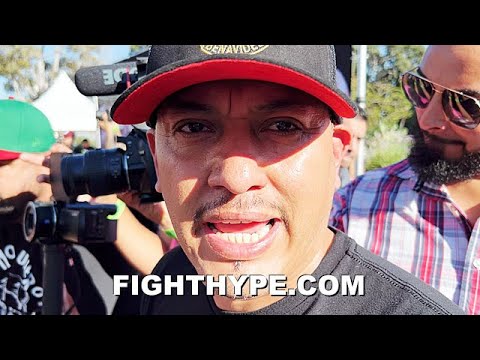 What time is Canelo vs. Golovkin? »