By Allan Fox: Teofimo Lopez says Ryan Garcia’s recent calling him out for a fight is just a “publicity stunt” to keep his name in the feeds without any serious intent in fighting him.

Ryan has picked up a bad habit of name-dropping fighters to gain a sense of importance & popularity from the boxing public that believes that he’s serious.

Recently, Ryan talked up a fight with Gervonta ‘Tank’ Davis during the entire promotion of his fight with Javier Fortuna. It appeared that this was a trick to help attract boxing fans in watching Ryan’s match with Fortuna, which very few people had any interest in seeing.

Ryan’s track record of fighting the guys he calls out is dreadful, as he’s never fought any of them yet. Instead of fighting guys like Tank Davis, Devin Haney, and Teofimo, Ryan has enjoyed mismatches against Fortuna, Luke Campbell and Francisco Fonseca.

“No, I’m not. The king stays the king,” said Teofimo Lopez to Fight Hub TV when asked if he was surprised that Ryan Garcia called him out.

“How are they going to go to the next level? All these guys want all these endorsement deals and sponsors. They’re not going to get it with the amount of followers that they have. They have to show it in the ring and face someone like me or Lomachenko.

“That could be a publicity stunt to keep Ryan up in the feeds,” said Teofimo about Ryan Garcia calling him out. “My fights coming up; everyone is watching me. Come on, guys. You’ve got to think outside the box.

“So I’m not going to believe it until I see the contract. Let’s talk about Pedro Campa, the guy I’m fighting this Saturday. Ryan did his thing, Tank did his thing against Rolly.

“This is my time to shine. I’m not going to give all that to Ryan Garcia. f*** you. That’s how I feel. You’re not going to play me. Not anymore. No, not at all,” said Teofimo when asked if he thinks Ryan Garcia isn’t serious about fighting him.

“On my side, you’re not going to play me like that,” said Teofimo about Ryan. 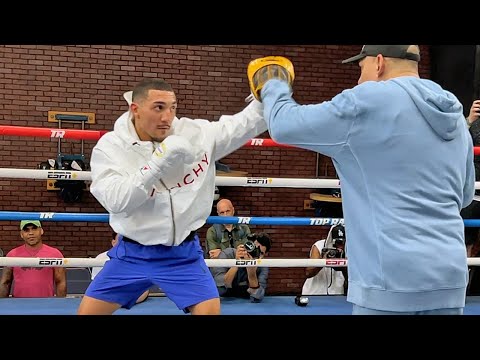