D’Amato was well known for the saying “Mind Over Matter” when he convinced 1952 Olympic Middleweight Gold Medalist Floyd Patterson he would and could someday become a heavyweight champion! Turning professional that year, Patterson weighed 164 ½ pounds.

In November of 1982, I met D’Amato and his fighter Kevin Rooney who lost to Terry Crawley at the Catholic Youth Center in Scranton, Pennsylvania. In a rematch in April of 1984, Rooney and Crawley fought to an 8-round draw back in Scranton in a fight that I helped arrange knowing the promoter when D’Amato said, “I want to see just how far Kevin has gone back.”

I made a trip to Catskill, New York in 1984 to visit the gym where D’Amato was training boxers. In the gym, as his guests, there were members of the Hilton family from Montreal, Canada, including father Davey, Sr., sons Davey, Jr., Matthew (future world IBF Light Middleweight champion), and Alex. The father always wanted D’Amato to train him when he was pro, so he brought his sons to him for some pointers.

I stayed at the home of Camile Ewald, whom D’Amato lived with along with several of his amateur boxers, including trainer-to-be Teddy Atlas. I kept D’Amato up from 9 pm to 3 am, picking his brain. One word sums up my opinion of him, and that is “Genius!” Ewald was not happy with me in the morning for keeping him up so late. She was tough but loveable!

D’Amato talked about Patterson in a fight that he was no longer training him and that Patterson’s back went out on him. Patterson saw D’Amato in the back of the room afterward and said, “Cus would probably know why I lost.” He asked Patterson, “did you have your special shoe on?” One leg was shorter than the other. He replied, “no, I didn’t, Cus!”

D’Amato discussed how the only way he could get former 1956 Olympic Silver Medalist Torres, 34-1-1, in with world champion Willie Pastrano, 62-12-8, as if he didn’t work the corner. Rumors were Pastrano had underworld connections. D’Amato sat at ringside next to the assistant trainer giving him instructions and calling out “numbers” on what to do. At the gym where he trained boxers, the heavy bag had numbers written on it. It was in March of 1965 that Torres won the title, putting Pastrano into retirement. Torres stopped Pastrano in nine rounds at Madison Square Garden in New York.

I wasn’t aware of whom Mike Tyson was at the time during my visit, but he was a year from turning professional as we watched his future manager Jim Jacobs “Greatest Fights of the Century” films in Tyson’s bedroom, and he loved the look on the film of heavyweight champion Jack “Manassa Mauler” Dempsey, no robe, no socks, etc. He was very knowledgeable about the history of past boxers.

D’Amato talked about a fighter he once had in the gym boxing his sparring partner’s ears off. When he got out of the ring, D’Amato asked him, “why don’t you box like that in a real fight?” He was told, “what do you think I am a sissy?”

D’Amato appeared in the movie “AKA Cassius Clay” and the television show “To Tell the Truth!.” He was known for teaching the “Peek-a-Boo” defense. He secretly trained Handball champion Jim Jacobs, for a year, preparing him for a fight with Archie Moore that never developed. It was reported he attempted to train the basketball great Wilt “The Stilt” Chamberlain for a boxing career that never developed.

Others D’Amato trained were Buster Mathis (Beginning of his career), 1956 Olympian Joe Shaw, Eugene “Cyclone” Hart, and Patrick Ford. He was inducted into both the New York Hall of Fame and the International Hall of Fame. 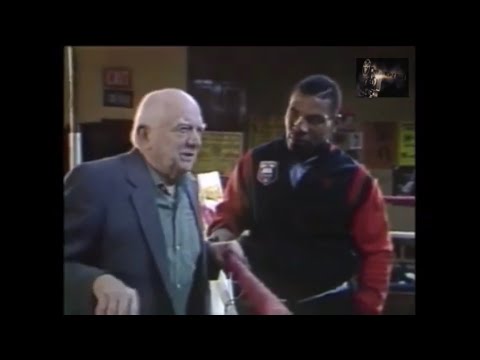 
« Regis Prograis wants Gervonta Davis when he moves up to 140

Estrada vs Cortes live on DAZN at 8 p.m. ET this Saturday »