Featherweight contender Michael “Mick” Conlan (16-1, 8 KOs), the two-time Irish Olympian and Belfast native, makes his long-awaited ring return this Saturday, Aug. 6, in the 10-round main event against Miguel Marriaga (30-5, 26 KOs) at The SSE Arena Belfast. Conlan hopes to rebound from his dramatic 12th-round stoppage defeat to Leigh Wood, while Marriaga, a three-time world title challenger, is on the hunt for a fourth shot at the brass ring. UK and Irish fans can catch the card on FITE TV:

Conlan will battle Colombian puncher Miguel Marriaga in the 10-round main event Saturday, Aug. 6, at The SSE Arena as part of Belfast’s annual Féile an Phobail festival. Conlan-Marriaga and undercard bouts will stream live and exclusively in the U.S. on ESPN+.

Promoted by Top Rank and Conlan Boxing, tickets go on sale Friday, June 10, and can be purchased at Ticketmaster.co.uk.

“There is no place like home, and we are thrilled that Mick will get another chance to perform in front of the tremendous Belfast fans,” said Top Rank chairman Bob Arum. “With a win over a solid opponent like Marriaga, he’ll once again be contending for a featherweight world title in short order.”

“I’m very excited to be back fighting in my beloved Belfast,” Conlan said. “Miguel is a great fighter, and together we’ll give the fans a memorable night at The SSE Arena. This bout will get me straight back in the mix for world titles, and I’m relishing the task at hand.”

Added Jamie Conlan, CEO of Conlan Boxing: “The road back for Michael starts with Miguel Marriaga. Miguel is a dangerous man and one of the biggest punchers in the division who has mixed it up at the very top. August 6 will be another electric night in the city in what is becoming an annual Irish boxing tradition with Michael’s fight night at the Féile festival. The goal remains the same. Michael Conlan will be Ireland’s next world champion.”

A two-time Irish Olympian, this marks Conlan’s fourth professional outing in Belfast and third time headlining during Féile an Phobail. In August 2019, he knocked out Diego Alberto Ruiz in front of a sold-out crowd at Falls Park. Last summer, another sold-out crowd packed Falls Park as Conlan (16-1, 8 KOs) bested former junior featherweight world champion TJ Doheny over 12 rounds. The Doheny victory earned Conlan the mandatory position to fight Wood. In an epic Fight of the Year battle, Conlan, who was ahead on the scorecards, lost via 12th-round stoppage.

“I want to get back in the world title mix as soon as I possibly can, and I thought Miguel Marriaga would be the perfect kind of guy, perfect statement to make that. Thank you to Miguel for coming. I think he’s a fantastic fighter, a very tough opponent, a very tough pick for a comeback fight. But in my opinion, the perfect one because I want to show my level. I obviously was 90 seconds away, whatever it was {against Leigh Wood}, but I know how good I can be. I know what I have left to give. I believe for me to get back {to title contention}, I didn’t need anybody easy. I wanted someone hard and an opponent who’s going to push me. And I believe Miguel is.”

“If you watch any of his fights, the only person to take him out is Lomachenko, and that was more his corner stopping the fight, not so much himself. I know he’s a tough dude. He will be there for the full 10 rounds. If there’s an opportunity to take him out, I will do that, but I know that he’s a tough guy. He’s high tempo, fast pace, and he will be there for the full distance punching and trying to take your head off. So, I’ve got to be ready. I’ve got to be prepared. I have many different game plans, which flutter about in my head, and I’ll decide in the ring which one I’ll pick.”

“Thank you to Belfast and Ireland for giving me the opportunity for this fight. I know it’s going to be a very good fight. Michael Conlan is an excellent boxer. I’ve also come well-prepared to make an excellent fight.”

“Obviously, the idea is to come here and win the fight, which is the most important thing.”

“It’s going to be a great fight. Tom {Hill} is a good opponent for me at this stage of my career. I’m ready to put on a great show. I’ve prepared well. I’m in the best shape of my life, so I’m ready to get out there and do a great job on him. I’m very excited to be back here in Belfast. This will be my third time, first time fighting at The SSE Arena. Last year at the Feile {an Phobail} was absolutely brilliant, and the crowd was brilliant. And my debut at Ulster Hall as well. I’m really excited to be back here and really excited to do a great job come Saturday night.”

“I’m just really looking forward to getting out there Saturday. I was lucky enough to be here last year at the Feile. The atmosphere was unbelievable. I’m really excited and proud to be part of it this year. I had a couple of fights fall through pretty recently, but we just regrouped, got back to training, and I’m looking forward to a really good performance come Saturday.”

“I think the last time I boxed in Belfast was maybe 2014 in the Ulster Seniors, so to get back here, it’s a great day for me.” 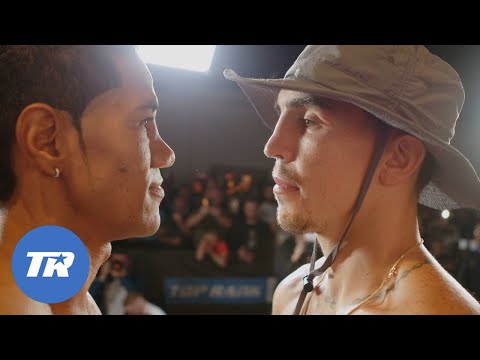 « Both Conlan and Marriaga Are Aiming for The Bounce Back Victory