Michael “Mick” Conlan returned home to Belfast and got back on the winning track. Conlan, who lost a featherweight title bid in March, defeated Miguel Marriaga by unanimous decision in the 10-round featherweight main event Saturday at The SSE Arena.

Conlan (17-1, 8 KOs) prevailed by scores of 99-88 2x and 99-89, securing knockdowns in the seventh, eighth, and ninth rounds. Marriaga (30-6, 26 KOs), a three-time world title challenger, dropped to 1-3 in his last four fights but showed a flourish of his vaunted power. In the 10th round, he buckled Conlan, and there were anxious moments for both men navigating the slippery canvas.

Conlan got the result the packed house came to see. He then called for a rematch with Leigh Wood, the WBA champion who scored a come-from-behind 12th-round knockout in a modern boxing classic. 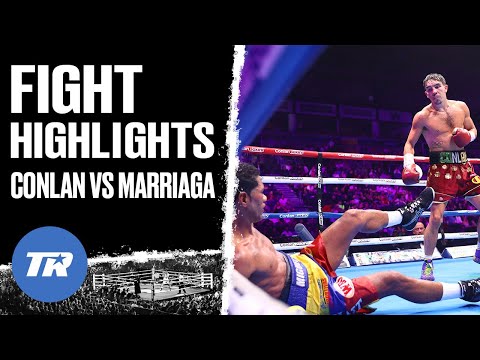 Conlan said, “I had to get rid of a lot of demons tonight. Even in the fuc*ing last round, he hit me with a shot. That guy can punch. {He has} 10 more knockouts than I have fights. He hit me with a jab in the first round, and it was like, ‘Oh, this guy actually can bang.’ I had to be careful and use my skills, which I did. In the last round, he caught me with a shot. Listen, I’ve been using my legs all night. I was a bit off the pace. He was pushing it. He landed a good shot. He buckled me a little bit. I felt it, and for me, to kind of come through that and it’s the last round… I got knocked out in my last fight in the last round. I think that says a lot. I’m back, baby. I’m ready for any of them.

“Obviously, I want Leigh Wood. It’s obvious, but Leigh has his own situation. So, hopefully he can deal with that and come through and the rematch can be done. If not, it’s any other champion. I want to get back in. I will be world champion, and I know I will. Whoever I face, I know I’ll beat him.”

Welterweight: Tyrone McKenna (23-3-1, 6 KOs) UD 10 Chris Jenkins (23-6-3, 8 KOs), Scores: 96-95 2x and 97-94. Jenkins, a former British and Commonwealth welterweight champion, appeared to do enough to earn the victory, but the three judges ruled in favor of Belfast native McKenna. It was a battle of Jenkins’ steady pressure against southpaw volume McKenna, and the two waged a phone booth affair. McKenna recovered from a barrage of body blows to have counterpunching success in the ninth and 10th rounds.

Junior Middleweight: Kieran Molloy (2-0, 2 KOs) TKO 2 Evgenii Vazem (9-36, 7 KOs), 1:23. Molloy, from Galway, Ireland, shined in pro bout number two with a devastating performance over Vazem. Early in the second, a four-punch combination, punctuated by a right hook to the body, put Vazem down for the count.

Molloy said, “I fit right in here. I’m an entertainer. I’m a good fighter, and I proved tonight that I’m a good boxer as well. I didn’t even look for that shot. I just landed that uppercut a few times. His elbows were coming up, and it was a nice, sinking body shot, so I just took it.”

NEWS:   What time is Vargas vs. Foster this Saturday on Showtime?

Super Middleweight: Padraig McCrory (14-0, 8 KOs) TKO 5 Marco Antonio Periban (26-6-1, 17 KOs), 2:14. McCory moved his knockout streak to four with a one-sided drubbing over the former world title challenger. Periban was dropped three times in the fifth round, the final blows coming courtesy of a quick-trigger combination that knocked him into a neutral corner. The referee waved off the fight, and McCrory secured the second defense of his WBC International Silver belt.

Welterweight: Paddy Donovan (9-0, 6 KOs) PTS 8 Tom Hill (10-3, 2 KOs), Score: 80-72. The Irish southpaw sensation returned from injury — and a nearly six-month layoff — to shut out Hill. It was the first scheduled eight-rounder for Donovan, a 23-year-old who is trained and managed by former middleweight world champion Andy Lee.

Donovan said, “It’s very important to get the rounds in. Tommy is a very, very tough fighter. We knew that before. He hopped in the ring before he accepted the challenge. He’s beat the Irish number one welterweight, knocking him down twice in the fight, so we know what he’s capable of.”

« Both Conlan and Marriaga Are Aiming for The Bounce Back Victory