By Craig Daly: Jose ‘Sniper’ Pedraza and Richard Commey battle it out in a 10-round fight in the headliner this Saturday night August 27th, on ESPN at the Hard Rock Hotel & Casino, Tulsa, Oklahoma. The Pedraza vs. Commey card will be shown on ESPN, ESPN Deportes, and ESPN+ at 10:30 p.m. ET.

The former IBF lightweight champion Commey is moving up to the 140-lb division after losing a one-sided 12-round unanimous decision defeat at the hands of Vasyl Lomachenko last December.

It’s going to be interesting to see if Commey’s power travels up to the light welterweight division, as he’s always been a big puncher at 135.

But when fighters move up in weight, sometimes they no longer have the pop in their punches. Teofimo Lopez is a prime example of that. He was a big puncher at 135, but at 140, he doesn’t have it.

In the chief support bout, heavyweight prospect Jared Anderson (11-0, 11 KOs) will take on Miljan Rovcanin (24-2, 16 KOs) in a scheduled eight round fight.

Also on the card, heavyweight prospect Richard Torrez (2-0, 2 KOs) will face Marco Antonio Canedo (4-2, 2 KOs) in a six round fight.

“Same as Richard, I’m coming off a loss,” said Pedraza. “I’m looking for a big win and to stay among the top names in the division.”

“I believe I need to be more active, to be more offensive in this fight.”

“A big win on Saturday against a great fighter like Richard Commey will put me a step closer to a world title opportunity. That’s what we’re looking for.”

Commey is a dangerous opponent for Pedraza, especially if he doesn’t run out of gas. Pedraza will need to be on the alert at all times inside the ring on Saturday because Commey is a tremendous puncher with both hands.

“It’s very important because I lost my last fight in December. It’s an opportunity to get back to winning ways, and this is my first fight at 140. I just want to announce myself,” said Commey. 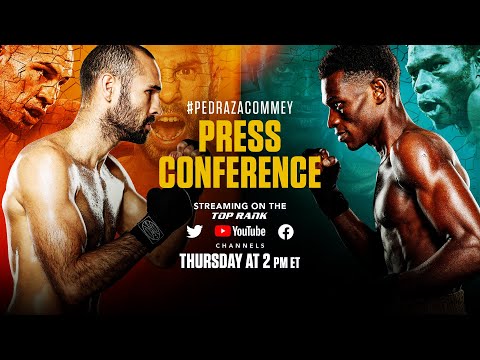 
« Deontay Wilder is now Jogging In training Camp for Helenius