How to watch Vergil Ortiz Jr vs. Michael McKinson

By Brian Webber: Unbeaten welterweights Vergil Ortiz Jr and Michael McKinson will be fighting in the main event on DAZN tonight from the Dickies Arena in Fort Worth, Texas.

This is basically a showcase fight for Ortiz to keep him winning and to make him look good in front of the casual boxing fans.

The light-hitting 31-year-old McKinson has no chance of winning, and he’s going to be in trouble from the word go.

This fight is more about Ortiz’s promoters at Golden Boy Promotions not wanting to take any risks with him for fear he might lose if he were put in with a quality fighter like Jaron ‘Boots’ Ennis, Rashidi Ellis, Keith Thurman, or David Avanesyan.

Vergil Ortiz Jr vs. Michael McKinson, how to watch?

“You always got to respect the fact that he’s coming from one side of the world to fight,” said Vergil Ortiz Jr to All Access Elite Boxing about Michael McKinson coming all the way from England to fight him.

“I got a lot of southpaw sparring. It wasn’t consistent because they wouldn’t show up sometimes. These rankings, how do I say this without p***** people off? Some people can be ranked #10 and fight for the belt. So honestly, sometimes the numbers don’t really matter,” said Ortiz.

“McKinson is a very crafty boxer. He can move and is obviously here to win,” said Oscar De La Hoya to Fight Hub TV. “He’s motivated, well prepared. He’s one of those guys who is always in the gym, and is on the call always, all the time.

“So, I think once they get in the ring, Vergil’s power. Once he feels the power,” it’s a whole different game,” said De La Hoya about McKinson. “So, I strongly feel McKinson is going to do good the first couple of rounds, three rounds, but I think Vergil’s power is going to overtake everything and change the whole fight. I’ve got Vergil by knockout.

“That’s why McKinson is the perfect opponent for Vergil, for his development. Vergil is going to be facing southpaws left & right. So why not face one of the top contenders in the world as he’s climbing the ladder because that difficult style is going to present itself?

“I think every fighter should be facing southpaws and learning and expanding your arsenal and game plan. I think Vergil is such a crafty fighter that he’s going to go in there and destroy him,” said De La Hoya. 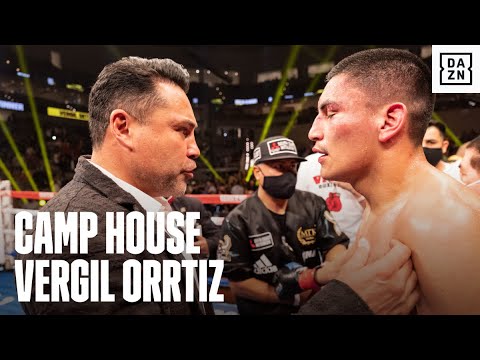