By Vince Dwriter: After a total of sixteen fights, Chris “Prime Time” Colbert was able to improve his position from prospect to world title contender.

A date of February 26 was set for Colbert to fight for the WBA super featherweight title, but unfortunately, the champion Roger Gutierrez caught COVID-19, and as a result, Colbert would have to move on and fight a last-minute replacement.

Hector Luis Garcia accepted the fight on two-and-a-half-weeks notice, and it enabled Showtime to move forward with their February 26 headliner. Instead of a championship match, Colbert and Garcia would meet in a bout that was labeled the WBA super featherweight title eliminator.

Hector Luis Garcia came into the fight as a +1100 underdog, but when the bell sounded, Garcia quickly erased the underdog narrative as he immediately set the tone by standing in the pocket and hitting Colbert with accurate combinations. In the seventh round of the fight, Garcia caught Colbert walking in and nailed him with a hard left-hand counter shot that sent Colbert down to the canvas.

Riding the momentum of his biggest career win to date, Hector Luis Garcia (15-0, 10 KOs) will cash in on his opportunity to win a world title on Saturday, August 20, at the Seminole Hard Rock Hotel and Casino in Hollywood, Florida.

The 30-year-old Dominican is extremely focused on his upcoming world title fight, and he isn’t a fan of the pre-fight verbal exchanges. Hector Luis Garcia is proud of his heritage, and he looks forward to putting on a good show and winning the WBA strap. “It’s not what happens outside of the ring; it’s what happens in the ring. When I win that belt, it’s mostly for me, but then after that, it’s for my country, for my daughter, and all the fans that support me and have been following my career.”

Roger Gutierrez (26-3-1, 20 KOs) is looking to successfully defend his title by doing what he does well, which is using his jab, fighting from a distance, and then when the time comes, sitting on his shots to deliver that extra pop. On the other hand, Garcia wants a replay of the Colbert fight in regards to dictating the pace, coming forward, being aggressive, utilizing his power, and consistently executing his ability to showcase good punch placement.

In regards to the two championship fights, both Garcia and Puello are looking at their bouts as opportunities to represent, make a statement, and win a world title for Dominican boxing and their native San Juan de la Maguana, Dominican Republic. 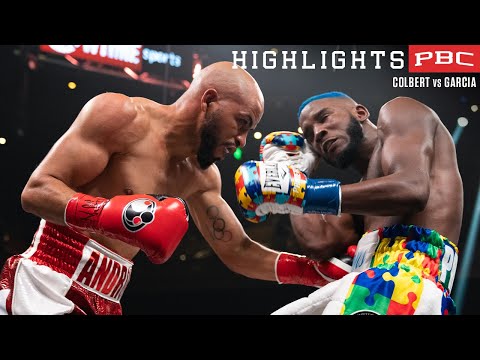