Devin appears to be working on targeting the body of Kambosos for the rematch, perhaps thinking of stopping him in that way. Kambosos has a good chin, but his weakness is taking shots downstairs. That’s why we’re seeing Haney putting so much focus on that area during camp.

Haney (28-0, 15 KOs) says he wanted a fight against Vasyl Lomachenko for October, but the talented former three-division world champion needs to take a tune-up first.

Besides that, Haney would have had to pay Kambosos (20-1, 10 KOs) a step aside to get him out of the way before fighting Lomachenko. It wouldn’t have been worth it.

“Who will  I be fighting at 140? I know if I go up to 140, I’ll want to fight for a world title right away,” said Devin Haney to AKHI TV. “Whoever they would make me the mandatory against whoever that’s who I would want to fight. 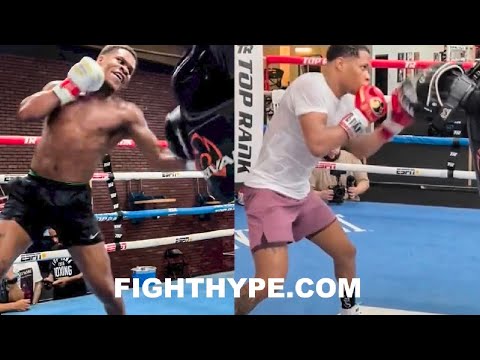 “I don’t know. I couldn’t really understand that,” said Haney when asked why Teofimo Lopez didn’t attempt to avenge his loss to Kambosos.

“Maybe because he genuinely couldn’t make the weight. Maybe the weight cut took a lot out of him. It could be that he felt that Kambosos was the better man. Kambosos just beat the wool out of him.

“Normally, when someone takes a loss, no matter what, they want a rematch to get another shot at the titles and another shot at the person that beat them. It’s surprising that he [Teofimo] didn’t want the rematch. That’s very rare. I know he [Kambosos] had his number the night they fought.

“I know that night he was the far better man and won the fight clearly. I can see where his style got the best of Teofimo, with him being overly aggressive and not thinking.

“His [Teofimo] IQ was just going for broke. With me, I’m a thinker in the ring, and my IQ is on a whole another level. So you can’t beat me by going mono to mono. You’ve got to be able to think and have an IQ,” said Haney.