By Brian Webber: Deontay Wilder is looking solid, putting hard work in with trainer Malik Scott this week, working on his left hook & stamina for his comeback fight against Robert Helenius on October 15th at the Barclays Center in Brooklyn, New York.

A bulked-up Wilder ran out of gas early in his last fight in October against Tyson Fury, and he can’t afford to have that happen to him against Helenius.

Former WBC heavyweight champion Wilder (42-2-1, 41 KOs) may need that left hook to bail him out of trouble against the heavy-handed Helenius (31-3, 20 KOs) if he’s not able to get the job done with his vaunted right-hand.

It’s no secret that Wilder has always been one-dimensional on offense, as he’s never had a good backup weapon to use when he was unable to land his lethal right hand. Although Wilder has tried to develop his left hook and jab, he’s failed to improve them enough to be the type of weapon that his right has been. 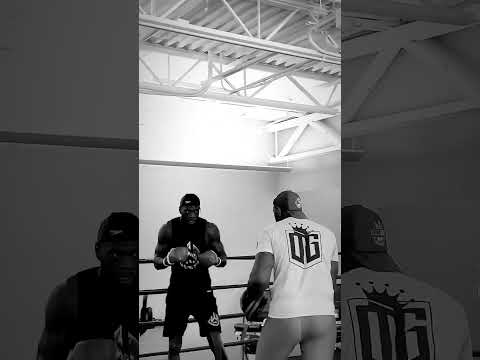 “We’re going to find out on October 15th how I’m feeling when it shows up and shows out,” said Deontay Wilder to 78SPORTSTV. “I can’t wait, especially with Robert [Helenius] being a long-time sparring partner of mine.

“My training has been crazy. I’ve never done so many rounds, but I’ve had to do it to the credibility of my coaches and doctors,” said Deontay.

It’s important that Wilder come into the fight against Helenius as lean as possible because he’s not able to carry the weight that other heavyweights can.

For example, in Wilder’s last two fights against Fury, he bulked up to the 230s and looked slow & sluggish. The speed that Wilder had in his first fight with Fury was missing due to all the weight that he’d packed on.

“I’m back by popular demand. Many times, I was questioned, ‘Champ, are you coming back?’ I really didn’t have an answer,” said Wilder.

“I was living my life and enjoying myself, enjoying my family. I was enjoying this generational wealth that is developing. As a fighter, when you’ve been away from the gym for so long, you feel like hitting something,” said Wilder.


« Frank Warren optimistic that Tyson Fury vs. Oleksandr Usyk can be made

Fury & Joyce are too big for Usyk says Frank Warren »