By Sam Volz: Deontay Wilder says his heart tells him that Oleksandr Usyk will defeat Anthony Joshua this Saturday night in their rematch.

The former WBC heavyweight champion Wilder feels that the unbeaten unified champ Usyk (19-0, 13 KOs) has the momentum now, which is going to make him difficult to beat by Joshua (24-2, 22 KOs) in their clash on DAZN PPV at the Jeddah Superdome in Saudi Arabia.

Joshua, 32, looked confident &  relaxed today in meeting with the press and appears to be sold on the game plan from his new coach Robert Garcia.

However, Usyk is the type of fighter that can adapt on the fly, and he could shred any simplistic game plan that Joshua comes into the fight with.

“My heart says Usyk easily; he’s got the momentum now. But this is boxing, and you never know,” said Deontay Wilder to PBC podcast with his pick of Oleksandr Usyk over Anthony Joshua.

“I wish them the best of luck and hope they get out of the ring just like they came in – safe and sound,” said Wilder.

“No, he didn’t do it on purpose. All he did was boxing training that his coach told him to do,” said promoter Alex Krassyuk to iFL TV when asked if Usyk had gained weight for the fight.

“I don’t think it was anything special, so my prediction is his weight won’t differ much from the one from the previous fight,” Krassyuk continued.

“When you open the Internet and look at the comments, there are so many strategies about what Joshua should do. Number one, he has to be aggressive. Done. Number two, he has to put his power. Done.

“He has to be rude, brutal. Done. This is the game plan for Anthony Joshua. Being rude, strong, and probably something else.

“He’s strong, solid, and his moves are okay. I saw his eyes. He’s quite confident. I think his trainer gave him some ideas that he has to stop thinking,” said Krassyuk about Joshua. 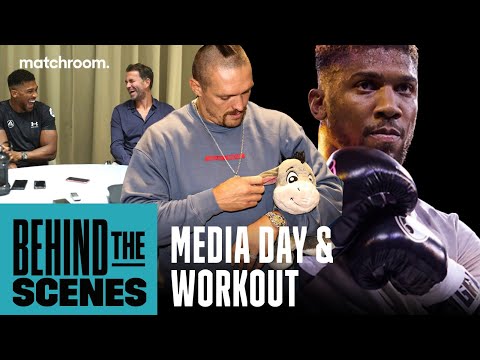 
« Caleb Plant vs. Anthony Dirrell on Oct.15th at the Barclays Center in Brooklyn