Ruiz feels that Joshua (24-3, 22 KOs) isn’t the same fighter he once was since his seventh-round knockout victory over the big Brit in June 2019. In Ruiz’s view, he believes that Joshu needs to take a break from boxing and focus on his future. 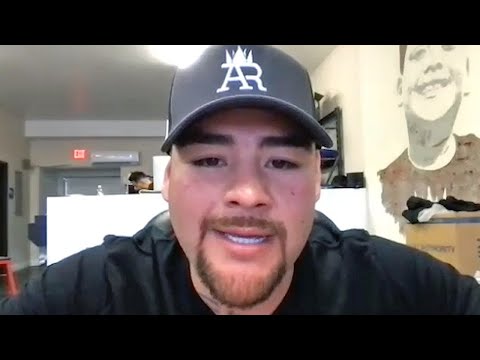 He thinks Joshua is still capable of becoming a world champion again, but he just needs time off.

Ruiz (33-2, 22 KOs) says he specifically picked out southpaw Luis Ortiz for his September 4th fight to prepare him for the lefty style that Usyk uses.

Even though Ortiz and Usyk are nothing alike inside the ring, Ruiz feels the fight will prepare him to challenge the undisputed champion for his three belts.

Ruiz can lock himself in as the WBC mandatory to Tyson Fury if he defeats the 43-year-old Luis Ortiz (33-2, 28 KOs) in their title eliminator on September 4th on FOX Sports PPV at the Crypto Arena in Los Angeles.

“I was telling everyone that Usyk was going to win because Joshua wasn’t the same,” said Andy Ruiz Jr to Fight Hub TV, reacting to Joshua’s loss to Usyk.

“Everyone was messaging me, ‘Joshua isn’t the same ever since he fought you,’ but every fighter goes through rollercoasters. We can’t judge every fighter by their wins and losses because we have to respect every fighter because we risk our lives out there to feed our family and give you guys entertaining fights.

“Maybe he [Joshua] needs a little break from boxing, maybe he needs a little time off just how I did and focus on the future and his life. Best believe, he can be champion again.

“He’s such a great guy and great sportsmanship and great champion as well. It would be an amazing fight, and that’s exactly why we picked Luis Ortiz because he’s a lefty style,” said Ruiz when asked how a fight between him and Oleksandr Usyk would be.

“He’s one of my first lefty style that I’m going to fight in my professional career besides me sparring in the amateurs. But I feel I can adapt to every different style. You guys will see on September 4th.

“I feel that’s exactly what Anthony Joshua needed. He needed that Mexican style and pressure, especially since he was a bigger guy. But my hat goes off to Usyk because I knew he was going to win as well,” said Ruiz.