By Dan Ambrose: Andy Ruiz Jr. says Anthony Joshua’s mental meltdown inside the ring after his loss to Oleksandr Usyk last Saturday resulted from his unfulfilled expectations about the fight.

Ruiz says he wishes Joshua had reacted the way he did when he lost to him in their first fight in June 2019. According to Ruiz, Joshua complimented him, saying, “You’re the better fighter.”

It’s unclear whether that style would work for Ruiz, however, because he’s handicapped by his short legs, which don’t allow him to move around the ring quickly enough to land his shots on mobile fighters.

We saw what Joseph Parker and Joshua did to Ruiz when they used mobility to prevent him from getting close enough to get his shots off.

Unfortunately for Ruiz, that flaw in his game will always be there no matter what because his legs are too short, and he’s carrying a lot of upper body weight on them.

“He did. I think he needed to be more aggressive and let his hands loose,” said Ruiz about Anthony Joshua’s loss to Oleksandr Usyk last weekend. “I know Usyk is a difficult guy, but things happen.

“Champions bounce back. He’s pretty good. He moves around, but I feel someone with that Mexican style can give him a hard time like me. Tyson Fury as well too,” said Ruiz when asked about his thoughts on Usyk.

“Me having that Mexican style being a pressure forward guy, throwing combinations to the bottom, top, bottom, that’s going to be a big difference. Yeah, he [Joshua] was doing it from the beginning,” said Ruiz about Joshua’s body shots. “Things happen.

“I think it was stress, the outcome he didn’t want,” said Ruiz about Joshua’s mental meltdown inside the ring after his fight with Usyk. “Only he knows how it felt because I’m sure he wanted to win, and he thought he was going to win.

“He didn’t get his way, but he’s an amazing guy. There’s nothing bad to say about Anthony Joshua. I think he should have just reacted like when I beat him. ‘Hey man, you’re the better fighter. Blah-blah-blah.’ I don’t know. He was kind of mixed feelings, throwing the belts.

“I don’t know, just mad. Every fighter reacts differently in every situation as well, especially that one. He probably thought he was going to win because he went all the way to Saudi Arabia to make the fight. 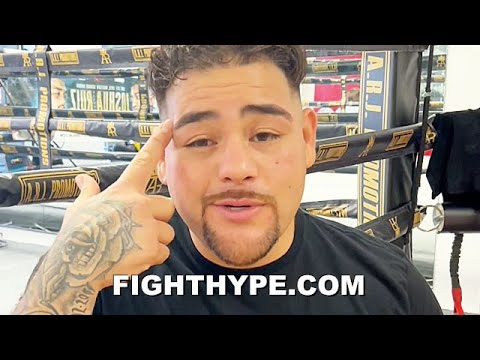 Naoya Inoue vs. Paul Butler to fight on Dec.13th in Japan »