They first met in September of last year when Usyk won a 12 round unanimous decision to earn the unified crown. Most observers agree that the biggest mistake for Joshua was trying to outbox a master boxer, and he had no plan B. 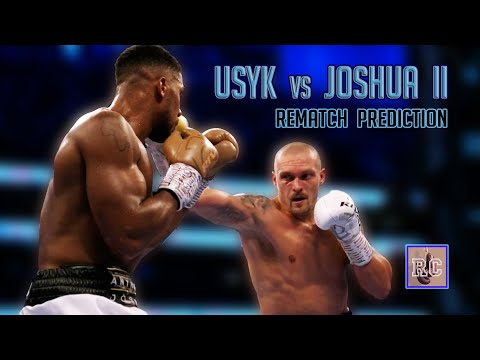 Usyk was too quick, too slick, and too smart, which enabled him to put on a fine display in the art of the sweet science. Usyk was determined, well conditioned, and his superior footwork and ring IQ allowed him to dictate the terms of the action for most of the contest.

Joshua never gained any real momentum in the first bout. The one stretch where he appeared to be gaining a little steam happened in rounds 5 and 6, but A never really succeeded in changing the tide, and Usyk reasserted himself to begin the second half of the fight. Since suffering the loss, Joshua has switched teams and is now under the guidance of Robert Garcia. Will a change in team and a change and tactics be enough for Joshua to reverse the outcome from their first encounter, which would make him a 3 time unified heavyweight champion? Or is it going to be a repeat of the first match where Usyk’s superior boxing skills and smarts will pave the way for another big victory?

So who will win the upcoming heavyweight championship rematch between Oleksandr Usyk and Anthony Joshua?

This edition of Rummy’s Corner will attempt to answer that question while providing a quick preview for the upcoming unified heavyweight championship rematch between Oleksandr Usyk and Anthony Joshua. Please watch and enjoy the video for one person’s opinion on this match up. This is Rummy’s Corner.

Canelo Alvarez has “a chip on his shoulder,” will beat Golovkin says Tim Bradley »