By S Saadeq Ahmed: Dallas’s Vergil Ortiz Jr. (18-0, 18 KOs) will have his first fight of the year when he faces Portsmouth’s Michael McKinson (22-0. 2 KOs) at the Dickies Arena in Fort Worth, Texas. The bout will stream live on DAZN on August 6. Fans can expect an excellent contest as the winner cements themselves as a top welterweight and moves closer to a world title shot.

Originally scheduled to headline a March 19 show at the USC Galen Center in Los Angeles, the fight was cancelled after Ortiz was diagnosed with rhabdomyolysis. McKinson remained on the card and fought Alex Martin on short notice, winning by unanimous decision. While this will be McKinson’s second fight of the year, the bout will come nearly a year after Ortiz knocked out Egidijus Kavaliauskas.

Ortiz is a fighter that moves very well around the ring in addition to being heavy handed. With his footwork, he lands hard shots from awkward angles, something that his 18 opponents have had no answer to. When an opponent does not fall early in the fight, Ortiz is able to methodically break down fighters and eventually secure the knockout win. As the opposition improves, Ortiz continues to demonstrate that his power is no fluke. However, it is taking him longer to earn the stoppage. Since he has spent almost a year out of the ring and had rhabdomyolysis, some may wonder what effect that will have in this bout. McKinson is the sort of opponent that will not only help provide the answers to that, but also further establish Ortiz as a top welterweight should Ortiz win.

McKinson is a fighter who relies on his ability to outbox his opposition. With only two knockouts in 22 bouts, he does not possess the same finishing capabilities as Ortiz. However, a closer look at McKinson’s fights reveals that he does possess the power to knock down opponents. Against Luis Alberto Veron, he scored two knockdowns and he knocked down Martin Harkin three times. Chris Kongo, one of the UK’s more promising welterweights, also suffered a knockdown against McKinson. He has shown that he is able to land well timed shots which have resulted in knockdowns. Ortiz will be McKinson’s best opponent till date and is the kind of fighter that will help determine the level McKinson is at. Given that Ortiz has been out of the ring for almost a year, McKinson may look to use that to his advantage.

This clash will attract viewers from both sides of the pond and is a fight I am sure will be worth watching. It features two young and undefeated fighters looking to make further strides in the welterweight division. I believe Ortiz will win by knockout in the later rounds after gradually breaking down McKinson. However, I also think that McKinson will have some success in the early rounds by staying on the outside and trying to outbox Ortiz. Eventually, I see Ortiz figuring out McKinson and landing the heavy shots he is known for. Regardless of the result, this is a bout boxing fans should tune into as it gives us yet another opportunity to watch fighters who could become world champions in the future. 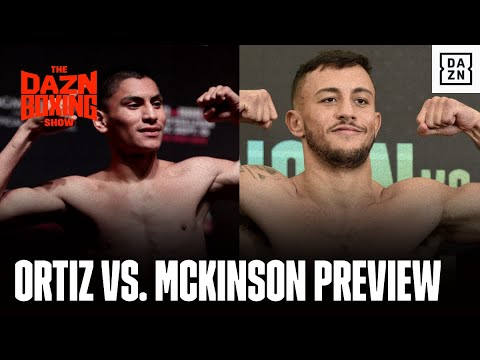