By Allan Fox: Vasyl Lomachenko doesn’t worry about WBC/WBO super featherweight champion Shakur Stevenson in a fight that could be happening soon in 2023.

It’s a risky fight for the 24-year-old Stevenson to be facing Lomachenko at this point in his career because if he’s not ring-rusty, as some boxing fans believe, he’s going to be a nightmare for Shakur.

The Lomachenko we saw last December against Richard Commey might be too crafty for Shakur to deal with.

Lomachenko and his dad will study Stevenson’s loss to Cuban talent Robeisy Ramirez in the 2016 Olympics and use that strategy against him.

Stevenson (18-0, 9 KOs) has sparred with the former three-division world champion Lomachenko (16-2, 11 KOs), and he knows what he brings to the table as far as skills, power & speed.

Top Rank promoter Bob Arum would like to make the Stevenson vs. Lomachenko fight,  as it’s a fight that could be would be very difficult for the 2016 Olympic silver medalist.

“I’ve been in there with Lomachenko before, and I ain’t worried about nothing when they come to anybody,” said Shakur Stevenson to Fighhype when asked about his thoughts on fighting Vasyl Loachenko in the future.

“When it comes to 100% me, I’ll beat anybody on any day, so I’m not worried about that. Sparring and fighting are two different things. Me personally, I’m a bad mother f****. I don’t care who is in front of me; whether it’s sparring or fighting, that same Shakur is going to show up,” said Stevenson.

Shakur will be fighting 2016 Olympic gold medalist Robson Conceicao (17-1, 8 KOs) on September 23rd on ESPN+ at the Prudential Center in Newark, New Jersey.

Conceicao’s only career defeat came at the hands of Oscar Valdez last September, losing a questionable 12-round unanimous decision.

This writer had Conceicao winning a clear decision against the A-side Valdez, but he got a bad deal with the judges. Valdez had the crowd in Tucson, Arizona eating out of the pam of his hands, and Conceicao basically had no chance.

“Much respect to Devin Haney; I feel he’s the man at 135. He’s got all the belts, and you can’t take anything away from him,” said Shakur.

If Haney fought Lomachenko right now, it would be more than he could stand at this early stage of his career. That’s a fight that many boxing fans are hoping will take place in October rather than Haney fighting former unified lightweight champion George Kambosos in a rematch. 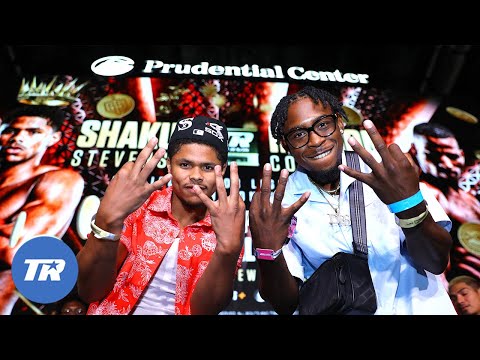 Conor Benn has started his camp for next fight »