By Adam Baskin: Ryan Garcia’s dad, Henry, is predicting an early knockout within four rounds in his son’s July 16th scheduled 12-round main event fight against Javier Fortuna on DAZN at the Crypto Arena in Los Angeles, California.

Henry says that when Ryan’s opponents come to “fight” with him, they get knocked out early, and former WBA super featherweight champion Fortuna (36-3, 25 KOs) is a career-long brawler.

The 33-year-old Fortuna always goes to war with his opponents, and you can expect him to stay true to himself by looking to beat the 23-year-old Ryan at his own game on July 16th.

Fortuna was an excellent knockout puncher when he fought at 130, but his power hasn’t traveled up with him since he’s been fighting at 135 since moving up in weight in 2016.

Ryan Garcia has to win and look impressive against Fortuna to punch his ticket for a massive money fight against WBA ‘regular’ lightweight champion Gervonta ‘Tank’ Davis in December.

Henry Garcia says Tank is a “mega-fight” for Ryan that boxing fans will “pay to see.” But first, Ryan must beat Fortuna on July 16th to stay on course for the title shot against Tank in December.

“We’ve got one more good week, and then it’s fight week, and then we’ll be in Los Angeles [for Javier Fortuna],” said Henry Garcia to ESNEWS about Ryan’s July 16th headliner against Fortuna on DAZN.

“We’ve prepared ourselves very well, and we’re hoping their team did their part, but we’re going to be very impressive that day. As you get older, things will improve. They have to,” Henry said about Ryan showing improvement as he nears his 24th birthday in August.

“I hope it can go more than four rounds, but I don’t see it happening,” Henry said in predicting an easily knockout for Ryan of the 33-year-old Fortuna.

“Fortuna, I give him a lot of credit. He’s a former champion with Ryan. If you fight him, your lucky if it goes past four rounds because he’s going to hit back. When Ryan hits, he’s very serious.

“I think it’s a mega-fight and one that people will pay to see and love to watch,” said Henry when asked about his thoughts on Ryan Garcia fighting WBA ‘regular’ lightweight champion Gervonta ‘Tank’ Davis later this year in December.

“A lot of people, for some reason, they doubt Ryan. They don’t understand his pedigree. It’s [Tank vs. Ryan] a great fight, and it’s meant to happen.

“Hopefully, it’ll happen come December, and I can’t wait. But again, first Fortuna, and then we’ll do [Tank Davis]. After Fortuna, get back to me, and we can talk about Tank, but right now, we’re all focused on Fortuna,” said Henry Garcia. 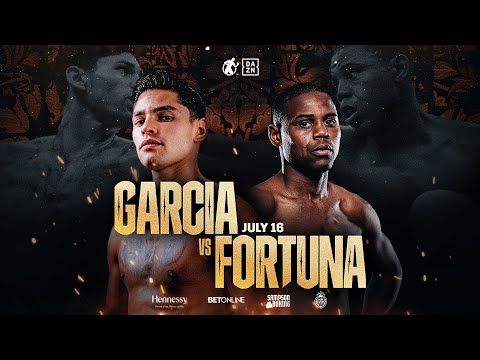