By Jim Calfa: Ryan Garcia says that once his fight with Gervonta ‘Tank’ Davis fight is signed, the hype behind it will surpass the interest fans have for the Canelo Alvarez vs. Gennadiy Golovkin III and Terence Crawford vs. Errol Spence Jr contests in terms of the domestic market in the U.S.

Ryan (23-0, 19 KOs) has a big enough social media following with his 8.9 million Instagram followers to encourage them to pay to watch him fight Gervonta (27-0, 25 KOs) on pay-per-view in December.

If Ryan can motivate those followers to purchase his fight with Tank on pay-per-view, it could break the all-time PPV record for buys set by Floyd Mayweather Jr vs. Manny Pacquiao in 2015. That fight pulled in 4.6 million buys on PPV.

The next runner-up was Mayweather’s fight against Conor McGregor in 2017, which brought in 4.3 million buys.

For the record, neither of those two fights was thrilling to watch or competitive. Mayweather played it safe in both contests and made the matches virtually unwatchable.

You can argue that Gervonta vs. Ryan Garcia will be exciting and give fans their money’s worth from start to finish.

Still, it’s questionable whether the casual & the hardcore boxing fans will be motivated to watch what would be viewed as a mismatch on paper.

The 23-year-old Ryan still hasn’t fought good enough competition during his six-year professional career to say that he really has a shot at defeating the former three-division world champion Tank Davis later this year.

“Ryan, you heard the crowd say, ‘We want Tank.’ That is one of the biggest fights that can be made in all of boxing domestically, perhaps only behind Canelo-GGG, Crawford-Spence. That’s right there,” said Chris Mannix to DAZN.

“Here’s the thing. They’re [Canelo-Golovkin & Crawford-Spence] big fights, but once the build-up starts and once we get it signed, the hype will overtake everything,” said Ryan Garcia, making it clear he believes his fight with Tank Davis will be bigger than those big contests.

“You got to remember that things rise up because people don’t believe it’s going to happen, but once it’s set, it’ll be bigger than any fight out there. I don’t care about Canelo-GGG III. I mean, I love those fights because Crawford-Spence, that’s a fight that I always wanted to see.

“I’m saying that commercially, once the [Gervonta vs. Ryan] fight is announced, it’s the biggest fight out there,” said Kingry.

“I will be out here to give the people what they want. My team will figure that out,” said Ryan Garcia at the post-fight press conference last Saturday night when asked what he’ll do if the fight with Gervonta Davis doesn’t happen later this year.

“I know Lupe [Valencia] has a great relationship with Al Haymon,” said Ryan.

De La Hoya is confident he can make Ryan vs. Tank

“Nobody else can make it. I want to talk to Tank Davis’ promoter and make that fight happen,” Oscar De La Hoya on social media last Saturday night after Ryan’s victory over Fortuna.

“Yeah, let’s make it happen. There are a lot of casuals and a lot of people that love Ryan as well. Do you guys think Ryan looked good, or he still has something to prove? What do you haters think or casuals?

“Ryan Garcia – Tank Davis at the end of the year, I will make it happen,” said De La Hoya. “Nobody else can make it happen. I don’t know who I have to talk to. Mayweather or Al Haymon? I do not know.

“I’m going to start making calls, but the only one that can make it happen is Ryan Garcia and me. Mayweather, let’s make it happen. When do you think Ryan will be ready for Tank Davis? You guys tell me because I’ll throw him in now. It was an amazing performance from Ryan,” said De La Hoya. 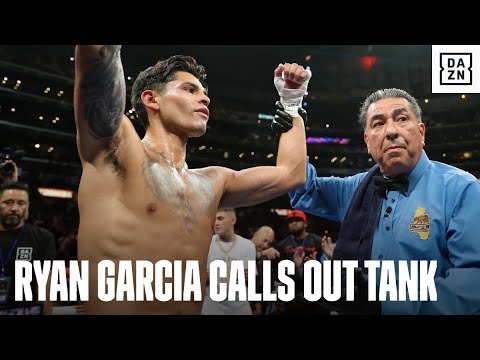 
« Rodriguez vs. Gonzalez on Sept. 17 LIVE on DAZN

Tyson Fury: “When they’re BEGGING, I will return” to fight Oleksandr Usyk »