By Sam Volz: Paulie Malignaggi believes lightweight Ryan Garcia is too big for former WBA super featherweight champion Javier Fortuna and that will be enough to carry him to victory on July 16th at the Crypto Arena in Los Angeles. The two fighters are headlining on DAZN.

The former two-division world champion Malignaggi questions whether Ryan Garcia wants to be famous or a world championship level fighter.

Ryan is already famous and has made millions with endorsements without ever winning a world title.

According to Celebrity Net Worth, Ryan Garcia’s net worth is $10 million, and it can keep increasing even if he continues to choose to fight fringe-level guys like Fortuna, Emmanuel Tagoe, and Francisco Fonseca.

Fortuna has been fighting at lightweight since 2016, but he’s yet to beat a top name since moving up to the weight class.

Last year, Fortuna lost to Joseph ‘Jojo’ Diaz, a former featherweight by a 12-round unanimous decision, and he didn’t look particularly impressive in that fight.

“The bottom line, I think Ryan Garcia is too big for Javier Fortuna physically, he’s too big,” said Paulie Malignaggi to ProBox TV. “Fortuna, I remember him distinctly being dangerous at 130 pounds, this guy, and he’s awkward.

If they can punch, they throw off your whole mechanics and really make you start to doubt yourself. Fortuna still has that style.

“I remember working a fight when he was at lightweight where he was the smaller guy against Robert Easter, and he gave Robert Easter hell. I think that fight might have ended in a draw, and that was an ex-world lightweight champion.

“Fortuna makes up for a lack of size at the weight class with his awkwardness. I think he probably has respectable power at 135 pounds, but at 130 lbs, this guy was dangerous.

“He just didn’t have anyone moving him that was fully taking care of him, but he always remained dangerous. For that reason, I think he still remains dangerous in this fight [with Ryan Garcia].

“I personally think Luke Campbell is a better fighter than Javier Fortuna. He had the Olympic pedigree. He’s not as awkward, but naturally a bigger guy. Granted, he came up as well, but he had a physical build that could fill into the lightweight better than Fortuna.

“Fortuna will look distinctly smaller than Garcia on fight night. He’s not a lightweight, But nonetheless, having said all this. We talk about the commercial life and all that other stuff,” said Malignaggi.

Endorsement deals pouring in for Ryan

“I was always high on Ryan Garcia, but recently just his decision-making and the things that happened, I can’t really knock him for it, but same time, we have to call it like we see it too,” Malignaggi said.

“Today’s prospects, today’s boxers, especially a guy like Ryan Garcia at the top of this list because he’s basically the poster child for this. There are other opportunities there before you ever make it big.

“You become big before you ever make it big in boxing, which was never the case before with the exception of a couple of Olympians. Even then, they’d only get a couple of endorsements. They still have to reach a championship level.

“So you’re already where you want to be, and so you start to ask yourself, ‘I’m kind of here already. I just got to maintain what I’m doing. Taking risky fights puts that at risk. If I get knocked out, all this might get taken away from me.’

“By the way, the Tank Davis fight will not bring him that because Tank Davis is not a lightweight champion. Devin Haney has all the belts. Nonetheless, it puts into question, does he [Ryan] want to be famous or does he want to be a championship-level fighter?

“If he just wants to be famous, you know he’s already doing a good job of that already. But if he wants to be a championship-level fighter, then we’re going to have to see more, but it’s going to take him a willingness to risk all this advertising money that he’s getting.

“If he’s able to risk it and come through and win these big fights, man, the sky’s the limit. You might have one of the biggest celebrities in entertainment in general, not just in boxing if he’s able to do that.

“Is he willing to put that at risk because right now, it’s pretty cushy, it’s pretty nice? I will say that he’s in the conversation with these championship fights, right? He’s talking about Tank Davis. Also, there was a little bit of back and forth with Canelo recently.

“Canelo kind of sent some negativity to him, and Ryan barked back. He said, ‘Well, you know, he’s telling me I got to step up and stuff, but you know, he won his first world title against Matthew Hatton.’

“Ryan has a point. Matthew Hatton never fought in the 154-pound division in his life, and yet was a mandatory for a vacant world title against Canelo Alvarez at 154 pounds.

“So he’s [Ryan] got a point there, but he kind of threw shade back by saying, ‘I wish I had a Matthew Hatton in my weight class but I don’t.’ So I’ve got to step up for real, not for fake is basically what he’s insulating. 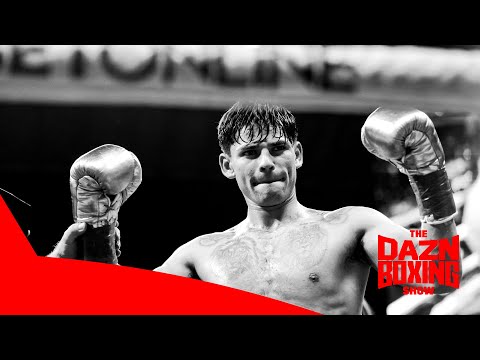