By Charles Brun: Anthony Joshua has nothing but positive things to say about his new coach Robert Garcia after hiring him to replace his longtime trainer Rob McCracken to guide his sinking ship.

However, that relationship could change soon, as Joshua is heading into the equivalent of a perfect storm with his rematch against Oleksandr Usyk on August 20th in Jeddah, Saudi Arabia.

It’s safe to say that if Usyk defeats Joshua again, the 47-year-old Robert will be sacked in place of a new savior from who knows where. Joshua will look for a scapegoat after he’s humiliated again by Usyk, and Robert Garcia will be the handy person to dump the blame on.

At some point, Joshua might figure out that it doesn’t matter who is at the helm of his troubled ship, he lacks the ingredients to be a world champion.

“The respect’s still there, Rob is welcome to the training camp at any time and give his two pence,” Joshua said to DAZN about his old trainer Rob McCracken.

“I feel every fighter should be able to go out into the world and learn from other people,” Joshua continued.

Joshua’s new trainer Garcia’s ideas to turn his career around may prove to be ineffective, as he wants AJ to be aggressive, fight hard and brawl with Usyk.

That style would work for a heavyweight with an excellent chin and the stamina required to fight like that, but not for a fighter like Joshua.

If anything, Joshua will be worse off with Robert in his career, especially if he fights aggressively against Usyk.

The only thing this writer is wondering is how soon will Joshua wait before giving Robert the royal boot to send him on his way while looking for the next flavor of the week as a replacement. As you know, someone has to take the blame for Joshua’s loss, and Robert would be the one with his head on the chopping block.

“It’s so important for a fighter to develop their skills with different coaches, don’t feel locked down and feel like you’re parting ways because you’re trying something new,” said Joshua blabbering meaningless words.

“I like Robert Garcia, I think he’s very talented, so I put his name on the list with four or five others,” said Joshua.

You’ve got to give Joshua’s promoter Eddie Hearn all the credit in the world for putting him in an ideal situation to capture a world title. Hearn turned Joshua into a champion and a star without matching him tough against Deontay Wilder, and Tyson Fury.

Joshua was lucky that his career didn’t end against 41-year-old Wladimir Klitschko in 2017 because he was there to be taken out by the ex-champion in that fight.

If Wladimir had shown any kind of aggression after dropping Joshua in the sixth, his career would have been finished. 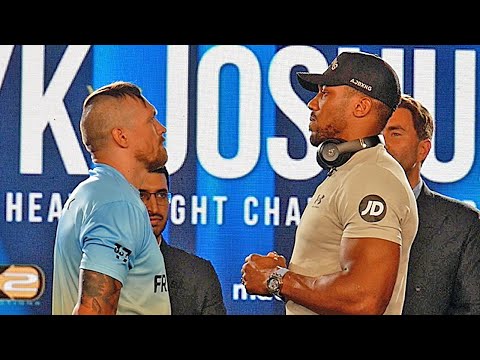