Canelo not committing to Bivol rematch next after Golovkin trilogy

By Sean Jones:  Canelo Alvarez’s loss to Dmitry Bivol hasn’t affected him enough mentally to commit to a rematch against him next after his September 17th trilogy with Gennadiy Golovkin.

It’s surprising to some that despite Canelo’s tough talk about wanting to avenge his loss to Bivol on May 7th, he’s not saying that he’ll fight him later this year after his clash against 40-year-old Golovkin.

This tells Sean Jones that Canelo has NO plans to get back in the ring with his conqueror Bivol in 2022 and will instead look to take a soft touch in December, likely against British fighter John Ryder.

That’s the same kind of opponent that Canelo (57-2-2, 39 KOs) has been fighting for the last two years when he beat four paper champions to become the undisputed 168-lb champion.

Canelo’s decision not to take the rematch with Bivol after the Golovkin trilogy isn’t a big shock because he doesn’t want to get beaten by him again, and he likely will .

The way that Bivol dominated Canelo with ease, battering him like a drum all around the ring, he’s not eager obviously to get back in the ring with this guy.

“As I say, I’m 100% focused on this fight because it’s a dangerous one, but I’m 100% looking for the other fight with Bivol,” said Canelo Alvarez to TMZSports when asked if he’ll face WBA light heavyweight champion Dmitry Bivol NEXT after his trilogy with Golovkin.

“My goal is to end this fight before the 12th round,” Canelo said of his trilogy with Golovkin. “I think I did better than him [in the last four years since their last fight in 2018].

“We’ve been wanting to knock him out for the last two fights and haven’t been able to do so,” said Canelo’s trainer Eddy Reynoso to Little Giant Boxing when asked about his thoughts on Alvarez saying that he wants to knock out Golovkin.

“We’re going to use defense, counterattack, and do what we do. They know each other very well. I think the first few rounds are going to be very complicated,” said Reynoso when asked what Canelo will do in the trilogy that will surprise Golovkin.

“That’s the price you pay when you’re on top,” said Reynoso about Canelo fighting better opposition in the last four years than Golovkin has during that time.

“Everyone criticizes and talks smack when you’re at the top. It comes with success. There are a lot of people like that. They don’t have courage,” said Reynoso about why Golovkin is no longer stating the kind of negative things he’s said in the past about Canelo.

“When they have that person in front of them, they think about what they’re going to say, opposed to when they talk about them online.

“GGG has been talking smack about us, me and Canelo, to the media. But look here, he doesn’t say anything. We hope GGG does his talking in the ring so it can be a great fight.

“Canelo now has much more experience than he did in the first two fights with Golovkin. A fighter that is much more mature and stronger. Canelo has fought better opposition, and we’re going to demonstrate it.

“It’s good and right,” said Reynoso when told that Golovkin’s trainer Johnathon Banks admires the work of Canelo. “A fighter that has done what Canelo has done deserves admiration and respect.

“Not much. Canelo was a bit upset, but now he’s calm,” Reynoso said about his thoughts on the face-off between Canelo and Golovkin. 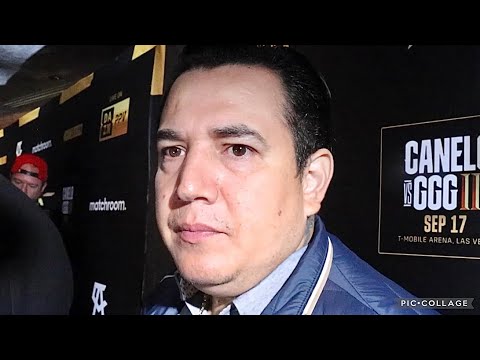 
« Joe Joyce ready for Fury or Joshua vs. Usyk 2 winner next