Teofimo Lopez exposed by Arnold Barboza Jr about his comments

By Sam Volz:  Light-welterweight contender Arnold Barboza Jr says he told the “lying” Teofimo Lopez to “shut up” after he recently complained on Twitter that the fighters at 140 have no interest in fighting him.

The undefeated #8 WBO Barboza (26-0, 10 KOs) says they’d tried to set up a fight with Teofimo (16-1, 12 KOs), but the match didn’t get made. So instead of Teofimo facing him, he’s planning on fighting second-tier journeyman Pedro Campa on August 13th.

The former four-belt unified lightweight champion Teofimo will be fighting for the first time since losing his titles to George Kambosos Jr. last November.

That loss may have taken something out of Teofimo mentally, making him vulnerable to almost anyone at 140.

Teofimo, 24, is moving up in weight to 140 rather than staying at 135 to try and avenge his loss to Kambosos. It’s unclear why Teofimo isn’t fighting Barboza, as he was a fighter that he was rumored to be facing in his debut at 140.

It’s possible that Teofimo or his team decided that Barboza was too risky of a fight for him after his long layoff and his defeat against Kambosos.

Barboza is arguably a better fighter than Kambosos, so it’s understandable why Teofimo would choose not to fight him in his first bout at light-welterweight.

“It’s alright. We tried our hardest,” said Arnold Barboza to Thaboxingvoice about his team had tried to make a fight with Teofimo Lopez.

“I seen a Tweet that he posted earlier saying no one at 140 wanted to fight him out of the top guys. I responded to him, saying, ‘Shut your lying a** up,'” continued Barboza about Teofimo.

Man I asked for Jose Ramirez and all the top heads at 140! We’re still discussing on the fighter. These fighters don’t want nothing to do with me.. smh!

And Josh Taylor a whole ass B****. Man’s protected like he’s in WITSEC!

“He’s lying, but it’s alright, hopefully, in the next fight. Let’s see how he does [against Pedro Campa]. I had some hopes [Teofimo would fight him].

“He talks a good game, him and his dad [Teofimo Sr], but it is a risk. Who knows how he comes back from that loss [to George Kambosos Jr]. He’s delusional if he thinks he won the fight. I think he got his a** beat.

“We’ll see, hopefully, in the future. Honestly, I respect Teofimo’s boxing skills. He’s talented; you can’t deny that. He’s going to be stronger. Obviously, he’s not going to feel the weight cut as much, but I think I’m too big.

“I’ve proven that I can box or I can brawl. It just depends on what game plan we’re going to go in that fight. But I’m over it, it’s not going to happen, so I have my opponent ahead. It’s time to move on,” said Barboza about him giving up on the idea of fighting Teofimo. 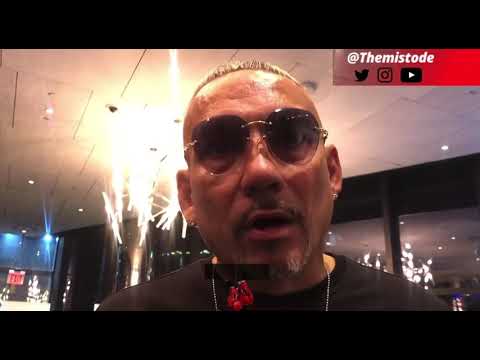