By Jim Calfa: Former British and Commonwealth heavyweight champion Julius Francis says he’s interested in fighting a rematch against boxing great Mike Tyson if there’s a promoter willing to put the match together.

Francis’ popularity is through the roof right now on social media after the way he dealt with an aggressive person earlier this month while on his job at BoxPark Wembley.

The 57-year-old Francis, who now works as a security guard at BoxPark Wembley, recently knocked out an aggressive person outside the building on June 12th.

Francis knocked the unruly individual with a perfectly placed right hand to the head, showing excellent power and form.

“If there is a promoter that’s willing to promote a sanctioned fight, I’m going to put it out there. I’ve never liked talking about money, but they could put up with a decent offer,” said Julius Francis to TMZ Sports when asked about a rematch with Mike Tyson.

Tyson wasn’t at his best when he defeated Francis in 2000, as he’d already been between twice by Evander Holyfield and stopped by Buster Douglas by that point in his career. That said, Tyson still had more than enough left in the tank to destroy Francis in two rounds in front of a large crowd at the MEN Arena in Manchester, England, on January 29th, 2000.

There would be interest from British boxing fans in a rematch between Tyson and Francis right now if it happened. With Francis’ recent incident at BoxPark, this would be the time for Tyson to fight him in 2022.

“I’m going to say we can have a rematch,” Francis continued about his desire to fight Tyson. “I don’t know if anybody will watch it, but I’m going to say, yes.”

Francis would be a better fight for Tyson than an exhibition match against YouTubers Logan Paul or his brother Jake. If Tyson is going to fight again, boxing fans would prefer to see him face an actual boxer, not an influencer from Youtube.

“Obviously, people name Jake Paul or the other [Logan] Paul or whatever, and it’s a mega-fight blah blah blah, but them guys, they’re not in my category,” said Francis about the popular YouTubers, who have turned to the boxing to make money.

It’s doubtful that Logan and Jake Paul would choose to fight Julius Francis because he’s not well known to U.S boxing fans, and they would likely lose unless he took it easy on them.

Logan recently fought Floyd Mayweather Jr. in an expedition match and looked fake, as if ‘Money’ was coasting in first gear the entire fight. 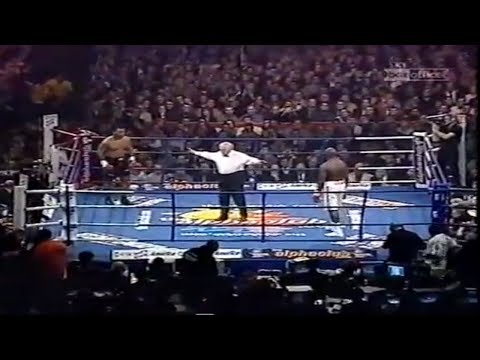