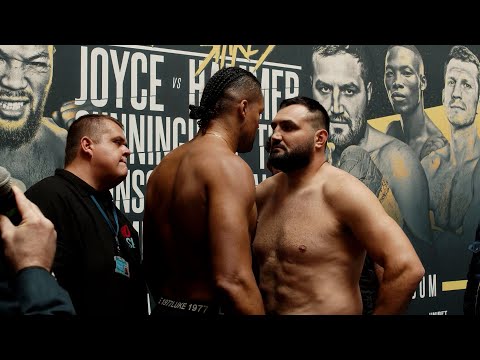 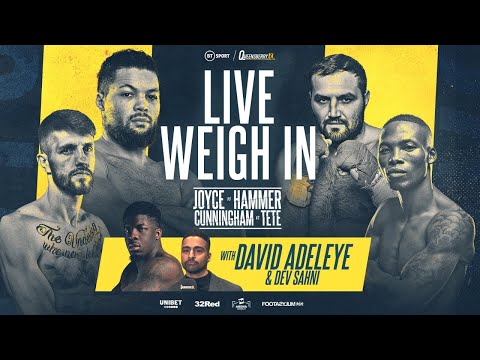 After being out of the ring since his defeat of Carlos Takam in July of last year and suffering a broken wrist that kept him out of action in the first half of this year, Joyce takes his place on the Wembley bill against the 34-year-old German Hammer.

“The most important thing is to get Joe active and confident again after injury,” said promoter Frank Warren. “Christian Hammer is an experienced campaigner who will provide a decent test and give him a good fight, but obviously we expect Joe to come through it successfully and then start preparing for a bigger showdown later this year.

“It was well documented that it was our intention to match Big Joe with Joseph Parker in September, but Parker has now opted to sign a promotional agreement elsewhere. Joe’s route to a world title shot does not revolve around Parker and we have plans in place for a major fight for him in the autumn.”

“I’ve known about Christian Hammer for a while now,” said Joyce from his training base in Las Vegas. “He has fought everybody, it is going to be a good fight, he comes forward and it will be exciting. It is one to get me ready for the next fights coming up.

“I’ve been out of the ring for a whole year now so it will be good to dust off the gloves and shake off the cobwebs. It is going to be a big year, this year and next, with some great fights and I just need to be in the right place.

“I have taken myself out to the right place with this training camp here to bring out the best in me.”

The Hamburg resident, Hammer, has taken on all comers across his near 14-year career, with names such as Tyson Fury, Erkan Teper, David Price, Alexander Povetkin, Luis Ortiz, Tony Yoka, Hughie Fury all featuring on his record. He most recently went the distance with WBO number three ranked Frank Sanchez.

His most recent title success came in 2018 when he defeated Michael Wallisch to win the WBO European championship belt, a title he also won in 2016 with victory over countryman Teper and subsequently made successful defences against David Price and Zine Eddine Benmakhlouf. 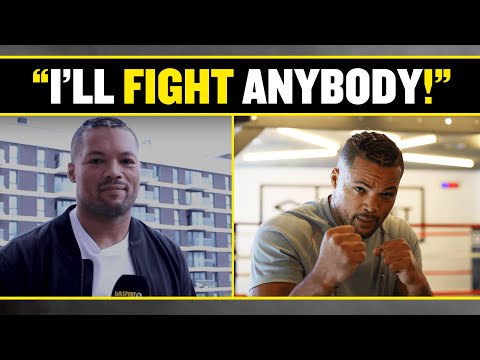 Due to a hand injury, Sam Noakes will no longer be defending his WBC International Silver lightweight title on the night against Marc Videl, so the Spaniard will now face an equally formidable foe from the Queensberry ranks in Mark Chamberlain, with the IBF European title on the line. This represents a first title tilt for the 10-0 Chamberlain and his first fight over 10 rounds.

Super featherweight newcomer Royston Barney-Smith has also suffered a hand injury and he is replaced on the card by the 6-0 welterweight Micky Burke jr.

Wycombe super lightweight Henry Turner is fighting over six rounds and Thetford cruiserweight Tommy Fletcher will make his professional debut in a four-round fight having recently signed to Frank Warren and Queensberry.

Tickets for High Stakes at OVO Arena, Wembley on Saturday 2 July are on sale now from £55 available from AXS.com and Ticketmaster.co.uk.

THE FIGHTING CAST for Saturday’s High Stakes card at the OVO Arena gathered today at Wembley for the final press call before blows are traded live on BT Sport.

Joe Joyce and Christian Hammer, Jason Cunningham and Zolani Tete, plus Mark Chamberlain and Mark Vidal fielded the questions and a selection of quotes from the media event are posted below.

Frank Warren
“Joe is the WBO No.1 and we are looking for him to make a statement. He is in with a real tough guy in Christian Hammer, a real handful who, in his last fight went in with the WBO No.3 in Frank Sanchez and it went the distance. So He is a tough guy with a good chin. Joe has only had 13 professional fights and is in a tremendous position. 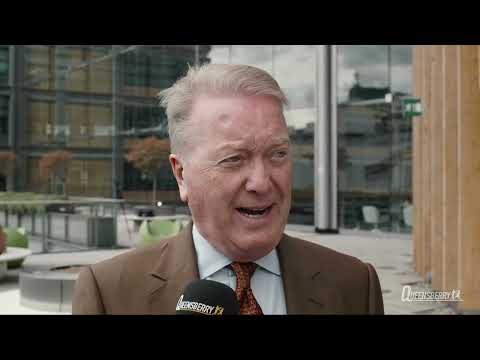 “Joe has got it all to do and I hate this type of fight to be honest. When Tyson Fury fought Otto Wallin in Vegas everybody thought it would be straightforward, but he got a dreadful cut and was fortunate to get to the end of the fight and not getting stopped. So anything can happen in these fights with big fellas and Joe has got it all to lose against Christian Hammer.

“Mark Chamberlain is certainly a big talent and is one of our gems at Queensberry. He has got to step up and this is a tough fight for him, but if we didn’t think he could do it we wouldn’t put him in there. Make no mistake, this is a quality match, but I believe he can come through this and make a statement.

“There is a great prize at the end for Jason Cunningham or Zolani Tete because I believe the winner at the end will get a world title fight. I really do take my hat off to Jason because, in a hard business, he is one of the guys who has done it the hard way and always been the away fighter. This fight has got something about it and it will be a cracking fight.”

Joe Joyce
“I’ve had a great training camp in Las Vegas again with Salas, rehabbed the injury and I’ve been adding more tools to the Arsenal. I am in a good place mentally, physically and I think Hammer is going to be a good test and a good fight. He is tough, durable and has been in there with some really good names. I am really looking forward to it, getting to work and maybe working on a few things in preparation for fights to come.

NEWS:   What time is Azim vs Reyes this Saturday on Sky Sports?

“I am not going to put any pressure on myself by predicting rounds. It could go the distance or I could take him out. He is a strong guy and I have seen him throw some big shots. It is a risky fight because I have got something they all want.

“In my experience, things don’t always happen as you plan, so when I am training camp I just get myself into the best possible place and look to improve. Obviously I was preparing for Parker, but I just made the adjustments and I have got the experience to deliver myself to victory on Saturday night.” 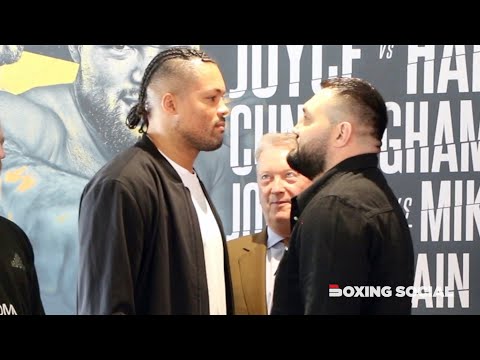 Christian Hammer
“It is my fourth time here and I am really happy to get the chance of a fight with Joyce and I am looking forward to it. I am feeling very well and I am in good shape. This is a big chance for me and I will give everything. I haven’t come here only for travel.

“Last time against Sanchez I received the contract only a few days before. I was there on holiday, they asked me to fight and I took the chance. For this fight I have prepared really well and I want to show everyone a good fight.”

Zolani Tete
“I would like to thank my promoter Mr Warren for giving me another opportunity and making it possible for me to be world champion for a third time. So I am taking this fight very seriously and I would never underestimate Jason. I believe it will be a great fight come Saturday night.

“I am definitely looking to chop Jason down. I am not going to take anything away from him as he has worked his way up. I have fought the best fighters in the world and I believe Jason is on his way up to this level.

“I am sharper and stronger than I have been before. I can’t wait for the night to show you this against Jason Cunningham. I’ve got more power than I have ever had.”

Jason Cunningham
“Everyone seems to have it in for me! My last opponent wanted to eat me, now Zolani wants to chop me down. At the end of the day it is all talk and it is what happens on Saturday night that counts. I am ready for Zolani and may the best man win, who I believe is going to be me.

“It is a very big fight, it is the next level and a phenomenal fight with respect to what he has done in the past. It is intriguing because people are questioning what Zolani is going to turn up. We will find out on Saturday night and I am excited myself, ready and prepared to put everything on the line.

“I believe it is my time, I am on the run of my life and he doesn’t want to underestimate me.”

Mark Chamberlain
“I feel good, ready to go and training has gone well. First of all I would like to say a big thank you to Frank for making this fight happen and believing in me, also to my team. I know he hasn’ been stopped and I am not going to go in there looking for it, but they all seem to say this and that, then on the night can’t back it up, so we will see. Expect a career best performance and we will see how he gets on in the later rounds.”

Marc Vidal
“I feel really well, I have trained really well and this is a fight I am ready for and feel good for. Chamberlain is a very good fighter, he is at a high level, but he has never faced anything like me so he is going to be in very deep waters.” 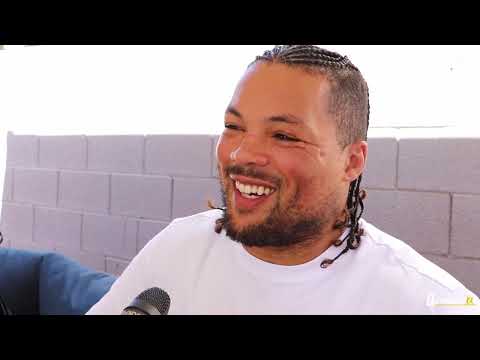 High Stakes at OVO Arena, Wembley on Saturday 2 July are on sale now priced from £55 and available from AXS.com and Ticketmaster.co.uk.