Hrgovic vs. Zhang lands on Usyk vs. Joshua 2 in Saudi Arabia, Aug. 20

By Reggie Luna: It’s often said that good things come to those who wait.

Former Olympic Bronze medalist and undefeated heavyweight contender Filip Hrgovic (14-0, 12 KOs) has waited well over a year for his chance to compete in an IBF title eliminator, and now the “Croatian Sensation” finally has it.

The long-awaited contest will more than likely be in direct support of the August 20 rematch between Oleksandr Usyk and Anthony Joshua, which is set to be staged at the Jeddah Super Dome in Jeddah, Saudi Arabia.

The five-decade fight trainer is excited for his latest heavyweight protege.

“I’m really pleased with the things that I see right now,” stated Coach Shields, “and Filip is going to be a big, big problem for the entire Heavyweight division.”

The scheduled twelve-round eliminator was originally slated to appear on the May 7th, “Canelo vs. Bivol” undercard, but was ultimately scrapped due to the passing of Filip’s father, Petro Hrgovic.

Ronnie believes the additional time with his young Heavyweight was a blessing in disguise.

“If you remember, this bout was originally made for Cinco de Mayo weekend, then scheduled for July 23. Because Filip and his father were so close, he needed some time to get his mind right. So I’m thankful that the fight was pushed back even further to August 20.”

Although Coach Shields and Ring Magazine’s ninth-ranked contender won’t be looking past the hard-punching, former Olympic Silver medalist on August 20, the prolific trainer is hopeful Hrgovic will become either Usyk or Joshua’s mandatory challenger within the next six months.

“I know most fans won’t agree with this, but we’re hoping that Tyson Fury is serious about his retirement,” Coach Ronnie Shields stated during his Tuesday night podcast. “We know that whoever wins in Saudi Arabia will prefer a huge money, undisputed unification with the current WBC Heavyweight champion.”

“It doesn’t really matter which sanctioning organization you’re ranked in, unification trumps everything. If Fury decides he wants to come out of retirement to fight the winner of Usyk/Joshua 2, that just means we’ll have to wait a little longer for our opportunity to become world champion.”

While becoming the next great heavyweight champion is the ultimate goal, Coach Shields assures fight fans that Filip Hrgovic will be completely focused on the always dangerous Zhilei Zhang come August 20.

“We know all eyes will be on Saudi Arabia, so we can’t afford to look past Zhang. For well over a year, Filip was waiting for someone to face him in this IBF title eliminator…Luis Ortiz, Tony Yoka, and Joseph Parker all turned down this fight…Zhang was the only man who accepted the challenge, so we know he’s a strong fighter.”

“I’m just excited for fans to finally see what Filip can do against a very good fighter like Zhilei Zhang on the biggest stage of boxing.”

“Hrgovic vs. Zhang” will take place on the undercard of “Usyk vs. Joshua 2”, set for August 20, at the Jeddah Super Dome in Jeddah, Saudia Arabia, and will be broadcast exclusively on DAZN PPV in the UK, and regular subscriber DAZN in the US, promoted by Matchroom Sport. 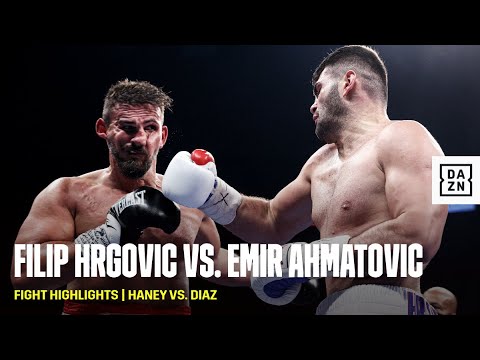