By Adam Baskin: ESPN analyst Tim Bradley says Edgar Berlanga (20-0, 16 KOs) would have been knocked out if he stayed in the pocket and continued to slug with Alexis Angulo (27-3, 23 KOs) lat Saturday night in their main event fight at the Hula Theater in Madison Square Garden in New York.

The undefeated #6 WBO super middleweight contender Berlanga made an early adjustment, going from brawling with the former two-time world title challenger Angulo to boxing him.

Many boxing fans on social media disagreed with those scores, believing Angulo deserved the victory over Berlanga.

The performance by Berlanga was not impressive in the least and left more questions than answers about his career. Although the popular 25-year-old Berlanga stayed undefeated, he didn’t show improvement over his two previous fights against Steve Rolls and Marcelo Esteban Coceres.

What was immediately apparent to all is that unless Top Rank matches Berlanga carefully against bottom-level fringe contenders, he will lose, and his career will be over.

The way Berlanga looked against the 38-year-old Angulo, it’s difficult, if not impossible, to see him improving enough to become a world champion or even a top-five contender.

That begs the question. Should Top Rank keep Berlanga on their payroll on their stable or quit him like a bad habit?

“His trainer stepped in and said, ‘Look, what are you doing? Why are you trying to please the fans?'” Tim Bradley told ESPN about Edgar Berlanga’s trainer having him adjust a lousy start against Alexis Angulo last Saturday night.

Bradley is going a little overboard, calling the 38-year-old Alexis Angulo a “big step up” for Berlanga. If anything, this was a small step up, and Berlanga failed, considering his win was questionable.

“If he would have stayed in the pocket & fought toe-to-toe, he probably wouldn’t have made it out of the ring. I’m going to tell you that right now because this guy has got some heavy hands,” Bradley said about the 38-year-old Alexis Angulo.

“Smiling face, he’s happy with his performance,” Tim said of Berlanga. “Maybe not everybody at home is happy with what they saw tonight, but you know what? I’m content with what he did tonight,” said Bradley.

“Yes, he did. You saw the reaction there from Angulo,” said Bradley about Berlanga attempting to bite him on the neck during the seventh round.

“He tried to bite him. Are you kidding me right now? Oh my goodness. Come on. ‘Alright, I can’t stop him with my punches, so I guess I’m going to bite him,'” said Bradley about Berlanga losing his composure and resorting to biting his 38-year-old opponent Angulo. 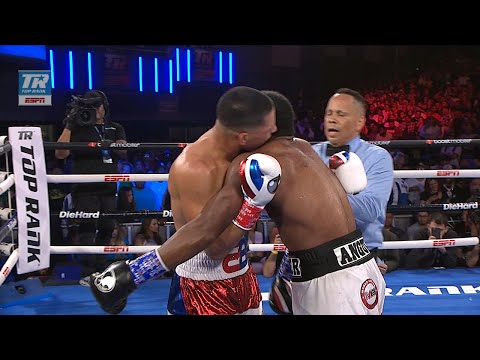