By Jim Calfa: Trainer Yoel Judah predicts Devin Haney will take George Kambosos Jr to school tonight, outbox him, and play with him before stopping him in the second half of the contest.

Yoel believes Kambosos’ corner will pull him out of the fight because he’ll be taking too much of a beating from WBC lightweight champion Haney (27-0, 15 KOs).

Unified 135-lb champion Kambosos (20-0, 10 KOs) and Haney will be headlining tonight on ESPN+ and ESPN in a 12-round fight at the Marvel Stadium in Melbourne, Australia.

This fight is for all the marbles at lightweight, for all four titles in the 135-lb division, and the winner will have the honor of holding all the straps.

Kambosos, who has been doing a lot of nonstop bragging about himself during the build-up to the fight, will have the home country advantage over Haney.

It’s going to be a tougher fight for Kambosos tonight than his previous one against Teofimo Lopez because Haney won’t gas out after three rounds like Teo did, and he’s going to stay composed throughout the contest.

If Kambosos is going to win this fight, he’ll need to put nonstop pressure on Haney, and try & hurt him the way Joseph ‘Jojo’ Diaz Jr. and Jorge Linares both did. Those guys ended up losing to Haney, but they had him hurt briefly during their recent contests.

“I came in to assist his father. His father put the game plan together,” said coach Yoel Judah to Fight Hub TV about him working with Devin Haney ahead of tonight’s match against George Kambosos Jr.

“Bill put everything into Devin that he’s supposed to have. Bill made a monster,” Yoel said. “Devin is a menace and will be a superstar in this game because he’s got everything. His father put it in him.

“I just came to assist him because I know certain things about him, certain things I can enhance Devin with. His father put it in him. Devin is going to be undisputed champion of the world come Sunday.

“His father put that in him, showed him how to be humble, and how to deal with crowds & people. Devin himself is a very calm young man. You can’t rattle him, and he’s focused.

“Devin has got tunnel vision. He’s so focused on this fight that there’s nothing going to bother him. Just win every round, what we plan on doing,” said Joel when asked what Haney must do to win a decision against Kambosos in Australia.

“Win every round, out-punch him, outgun him, outspeed him, and everything. I think personally, anything after eight rounds, Devin stops him, or his [Kambosos] corner is going to stop it because he’s going to get beat up pretty bad.

“Devin mentioned to me, which I wouldn’t think of. Devin said to me the other day, when I win this, I’m going to be the only trainer that’s a two-time undisputed world trainer.

“I’d have won two world undisputed championships, and I think I’m the only trainer to have done that. Devin is the one that brought that to my attention, and he’s right too. Also, that’s history.

“We want the big names,” said Joel about what Haney wants after he defeats Kambosos tonight. “He’s definitely going to get Tank because Tank has already called him out.

“Those three right now are at the top of the food chain, and Devin is ready for any one of them,” said Joel about who is in Haney’s future once he gets past Kambosos. 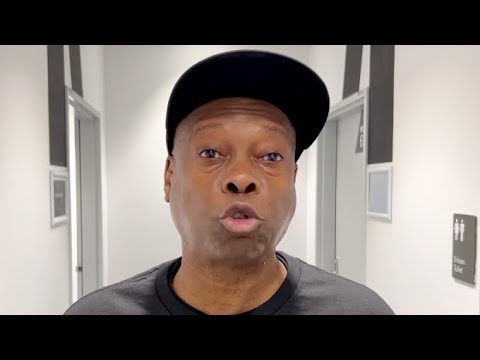 
« Bill Haney has arrived in Australia, says “Kambosos, you in trouble”