Canelo may have been sick before Bivol fight says Robert Garcia

By Brian Webber: Trainer Robert Garcia believes Canelo Alvarez was sick, injured, or worn down from too many fights as the cause for his off performance against Dmitry Bivol last May.

Robert, an expert at noticing when a fighter isn’t performing at 100% capacity, saw that Canelo (57-2-2, 39 KOs) wasn’t fighting at the same level that we’d seen in his recent fights at super middleweight.

Last Friday, Canelo mentioned that he wasn’t 100% for the Bivol fight, but he says his problem prevented him from training the way he usually does.

Garcia feels that whatever caused a big drop-off in Canelo’s performance, he’ll make sure it doesn’t happen again when he faces Bivol (20-0, 11 KOs) in the rematch.

If Canelo was sick, injured, or physically exhausted from a busy schedule in 2021, he should have postponed the fight against WBA light heavyweight champion Bivol. This guy is too talented for Canelo to have been battling without being at his best.

For Canelo’s next fight against Gennadiy Golovkin on September 17th, he will have to perform at a higher level for boxing fans to start believing that he’s the same fighter he once was.

Both fighters are viewed as yesterday’s news. Many fans believe Canelo is showing signs of ring wear and is past it like the 40-year-old Golovkin. Hence, fans do not have much interest in their trilogy match.

In the eyes of fans, the Canelo-Golovkin trilogy match is three years too late, and it’s pointless now. Canelo wasted his popularity since then by fighting British fighters and a faded Sergey Kovalev and Daniel Jacobs.

Those are the fighters that Canelo should have fought to stay on top in the last four years rather than wasting time against Avni Yildirim, Caleb Plant, Billy Joe Saunders, Rocky Fielding, Kovalev, Callum Smith, and Jacobs.

Canelo needs to make a statement

“They had two very close fights. A lot of people thought GGG won the first fight. Canelo won the second, but it was still very close,” said Robert Garcia to Fight Hub TV.

“Maybe it’s a little too late because GGG is close to 40 already, but GGG is still GGG. He still has the power, and it’s a winnable fight for GGG.

“It’s a fight that is going to do really good when it comes to numbers. People are going to tune in. I think it’s going to be a great fight, and Canelo is going to win. I think this time, a little more clear, but it’s still a very interesting fight.

“I think that Canelo needs a knockout in the last fight to make a statement, but GGG is solid. GGG is the real deal, but it won’t be easy. I wouldn’t be surprised if Canelo wins by a knockout.

I think it will be another great fight, very close, but in the end, I think Canelo can break him down with body shots and maybe stop him at the end.

“I think Canelo should stay at 168 for a while, but Bivol said he wants to get down to 168. Maybe do it at 168,” said Robert about the Canelo vs. Dmitry Bivol rematch.

If Canelo is smart, he needs to take the rematch with Bivol in December rather than putting it off until May 2023, as his promoter Eddie Hearn has discussed him doing.

It’s too crucial for Canelo to try and avenge the loss to Bivol right as soon as possible rather than putting it off until next year.

The interest in the Bivol fight was red-hot from fans, and it doesn’t make sense that Canelo & his promoter Hearn didn’t take advantage of that.

More importantly, Canelo’s PPV numbers are likely to suffer until he does avenge the loss to Bivol because fans believe the Mexican star is over-the-hill now or at the very least no longer interested in boxing.

Fans think Canelo is more into playing golf than fighting at his stage in his career and is going through the motions.

Alvarez may have been sick or injured

“He’s pound-for-pound the best in the world, he’s unstoppable, and he’s unbeatable, and he’s not human. They think he can’t get sick or get injured or have personal problems that are going to affect him in the fight.

“I just didn’t see the Canelo that we’re used to seeing. It was a totally different Canelo. He was standing up, getting beat up too easily, and pulling back, which he doesn’t do in his fights.

“I just think something could have been wrong,” Robert said, having suspicions that Canelo was sick or injured for the Bivol fight. “In the rematch, who knows? Maybe Canelo has what it takes to be better.

“I just know that having been around boxing, having fought as a professional fighter, I know there are so many things that happen in boxing. You do camp for two or three months, and there are always injuries.

“Sometimes you get knocked out in sparring, and nobody is going to announce it, nobody is going to mention it, and people still fight like that. You get hand injuries; you get sick. Covid is around in boxing, and it really affects. Who knows?” Garcia said.

Bivol rematch will be different

“Canelo is an athlete, and he’s a man of his word and continues to fight, but who knows if he was sick before the fight [with Bivol]?” Garcia said. “Nobody knows. So, I think in the rematch, I think we’ll see a better Canelo.

“Even though his mind and his team feel good and want to do it, his body might have been affected,” continued Robert with his speculation about Canelo being injured, sick, or worn down before his loss to Bivol.

“Yeah, fighting too often, and even though he clearly won those fights, but he still did those training camps, he still did sparring, he still got hit in sparring.

“He still did everything it took to prepare himself for those fights. So that takes a lot out of your body,” said Robert.

“It’s going to be a good fight. He’s an exciting fighter, a dangerous fighter too, but I’m going to be looking for the knockout, that’s for sure,” said Canelo Alvarez to Fighthype about his intention to KO Gennadiy Golovkin on September 17th.

“I feel more motivated. I can’t wait to get back in the ring, and I’m excited,” continued Canelo. “We’re going to do some little things differently, but like always, train 100%.

“Knockout, that’s the only thing I think this fight is going to end,” said Canelo. 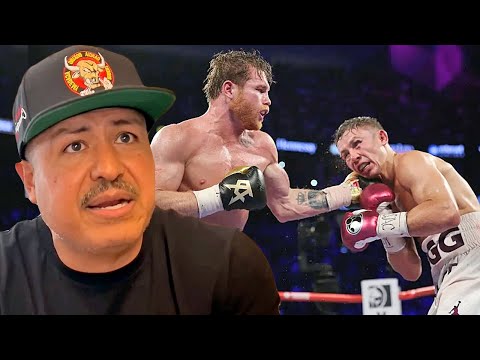 
« Ryan Garcia expects Canelo to do well against Golovkin in trilogy