Beterbiev vs. Smith winner moves on to bigger & better things

By Brian Webber: Artur Beterbiev and Joe Smith Jr. meet this Saturday night in a unification fight at 175 that will lead to the winner moving on to potential massive fights.

Canelo Alvarez and WBA 175lb champion Dmitry Bivol are just two of the interesting fights available for the winner of the Beterbiev vs. Smith fight.

The Mexican star Canelo is obviously the biggest prize, but whether he chooses to fight the winner will depend on how he does in his fights against Gennady Golovkin and his rematch with Bivol.

Joe Smith, 32, has a slight youth advantage over the 37-year-old Beterbiev, but it remains to be seen whether that will help him on Saturday. Beterbiev is a pressure fighter with massive power, and he’s an excellent inside brawler.

“You never know in boxing. The money is there one minute, and it can be gone the next,” said Joe Smith to Top Rank Boxing. “You got to make sure you put on a great show every time you fight and giving it your all. One loss can change everything. One loss and your back to the beginning,” said Smith.

Losing to Beterbiev would be a massive blow to Smith’s career, as it would send him back to the contender ranks, and it could take him a while before he’s in a position to fight for another world title.

“It’s a big fight, and one of the biggest fights in boxing, unifying three belts,” said Joe Smith Jr’s trainer Jerry Capobianco. “The winner of that will go onto bigger & better things.

“Artur Beterbiev has been dropped by lesser punchers than him [Jeff Page and Callum Johnson], and I don’t think the fight is going to be pretty. But the bottom line is the one that lands first is going to win.

“He believed he can beat me and wants another belt, but I’m just as hungry,” said Joe Smith about Beterbiev. “He’s got two belts on the line that I want, so it’s going to make for a great fight.

“There are days you don’t want to do it, but you’ve got to push through and get it done. That’s what makes a champion,” said Smith. “I enjoy being the underdog. I’d rather be the underdog because it makes me want to push harder and stronger.

“Don’t try and find a little mistake in this program. We don’t have it,” said Beterbiev’s trainer Marc Ramsay. “He’s never arrived late in advance. He’s never late. He’s really focused on his job. For him, this is a professional, and he’s looking at all small details.

“If sleeping late is not good for him, he’s not going to do it. End of story and that’s in every single aspect of boxing. For a coach, it’s all very good because you don’t have to look over all those little things.

NEWS:   Anthony Yarde to be tactical against Artur Beterbiev

“Right now, every single decision is an orientation for performance. He’s the type of guy that likes to communicate with the coach. He likes to sit down and ask why. If you explain to him and it makes sense, he’s going to follow. He’s not going to fight against that,” said Ramsay.

“He’s never reached a ceiling, he’s a very special human being, a very special athlete,” said trainer Luc-Vincent Ouellet about Beterbiev. “Everything is about boxing.”

“I don’t want to hurt him,” said Beterbiev about his sparring partner.

“This camp, he finally learned his lesson,” said assistant coach John Scully about Beterbiev. “He wasn’t digging the body 100%. I was like, ‘Artur, you got to lay it in there.’ He said, ‘If I do that, they all go home.’ I said, ‘Good point, good point.’

“Back in the day, Artur would have sent the whole camp home. He was doing it every day. He was murdering people, so he’s had to be reined in because his instructs are to kill, kill, kill, kill,” said Scully.

“Joe, for better or worse, he’s coming to fight. He doesn’t want to lose, he doesn’t think he’s going to lose,” said Scully.

“I’m anxious to get in there with him because this fight is going to bring bigger & better opportunities,” said Smith Jr about being anxious to battle Beterbiev. “A lot of people consider him the best in the division right now. So it’s a great opportunity for me to prove everyone wrong,” said Smith.

“When I do preparation, I’m not thinking about something,” said Beterbiev. “I need to do something, not just thinking and that’s it. I try to do my best, and show.”

“I heard loads of stories about how he is in sparring and how demonic and brutal and savage he is,” said Azeez to Sky Sports about his training with Beterbiev.

“I was a bit nervous going into the unknown but I was ready and prepared, it was such a brilliant experience.

“Artur is a brilliant fighter, he’s very very strong, very good boxing IQ as well. I can’t wait to watch the fight and see if he can pull off what he was practicing in the sparring and training.” 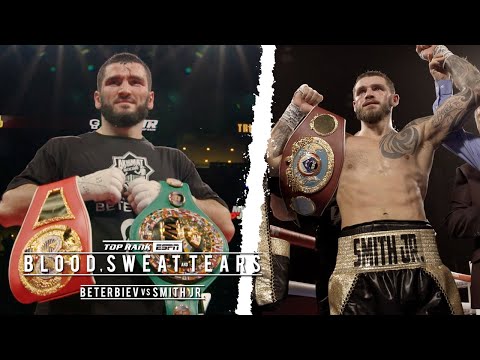